Siyo no match for Nontshinga 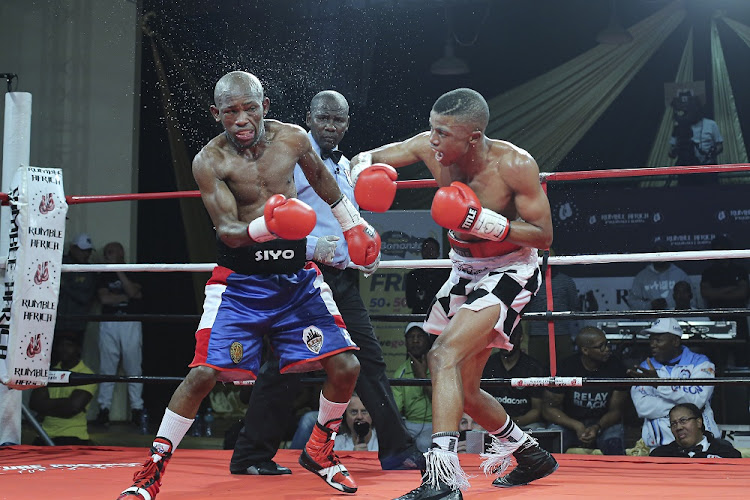 Sivenathi Nontshinga, black and white trunks, connects with heavy leather on Siyabonga Siyo who was rescued by the referee in round nine Sunday.
Image: Nick Lourens

Sivenathi "Special One" Nontshinga, who is being hailed by many as boxing's next superstar, lived up to expectations when the IBF Inter-Continental junior flyweight champion disposed of the usually durable Siyabonga Siyo at East London's Orient Theatre on Sunday afternoon.

A climactic conclusion, ebb and flow, determination and heart, this bout which formed part of Rumble Africa Promotions bill had it all.

Siyo from Duncan Village was on the ropes physically and figuratively when, towards the end of the ninth round, Nontshinga unleashed a barrage of blows, forcing referee Clifford Mbelu to step in between the two gladiators and end it all.

Some may argue that not all the avalanche of blows landed, but Mbelu realised that Siyo was not fighting back and he dully stopped the proceedings.

It had been an enthralling bout from the start until the dramatic end.

Nontshinga from Newlands in East London, Eastern Cape, improved to nine short route wins from as many fights while Siyo suffered his first stoppage in three losses against 12 wins.

Earlier in that SuperSport broadcast show, Xolisa Magusha came back from the brink of losing his South African mini flyweight belt to enormously talented yet overmatched three fight novice Siyakholwa Kuse thanks to a big fight temperament.

Michael Mokoena bulldozed his way to a hard-fought fifth round TKO of Phumelela Sobahle for the ABU SADC lightweight belt while UK-based Lamati from Mdantsane retained his IBF Inter-Continental featherweight belt with a 10th round stoppage of Filipino Richie Mopranum, who quit on his stool at the end of that round.

Boxer undefeated after five fights
Sport
2 years ago
Next Article