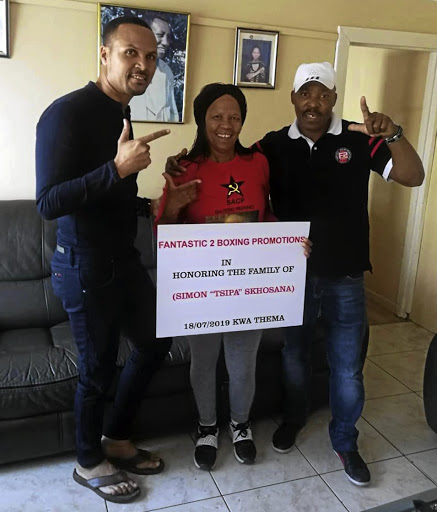 A jail cell could not soften up KwaThema toughie, Simon "Tsipa" Skosana, instead it made him more uncompromising just like Nelson Mandela who came out of jail to conquer.

Skosana spent three days in jail for no apparent reason. The tiny boxer was released few days before he retained the SA bantamweight title against Fransie Badenhorst at Westridge Tennis Stadium in Durban on April 2 1986.

Skosana's untold story was revealed by his niece, Thoko Skosana, on Thursday - a day that has become known as Mandela Day. She had welcomed promoters Elias and Fanakhe Tshabalala, and boxing official Cyprian Ndaba to the Skosana family.

The Tshabalala brothers had gone to the family to fulfil a promise they made to the families of Skosana and that of late trainer Themba Zulu that they would share with them a part of the proceeds of their maiden tournament they staged at KwaThema Civic Centre on June 30.

Elias and Fanakhe described their visit as part of the 67 minutes dedicated to Mandela Day. They gave Thoko and Zulu's wife, Nonhlanhla, R5,000 each. Skosana died in September 2009 and Zulu in September last year.

Thoko said Skosana went through a lot against the system every time he was to fight against white opponents.

"He was arrested when he was walking back home from school," she said fighting tears. "He spent three days in a cell; he was released few days before the weigh-in and he went to defend his title," she said.

"The old regime did a lot of things to destabilise him. We were convinced that they did not want this black boy to beat up white opponents. But all those things did not deter Tsipa."

Skosana failed to win the WBA belt from Venezuelan Bernando Pinango at Rand Stadium in 1986. A bad cut caused him to quit in the 15th round. Skosana later lost to Kenny Mitchell for the WBO junior featherweight title in 1989 and retired in 1996.

Zulu kept the fires burning in KwaThema, honing the skills of a number of boxers, including Smangele Hadebe, who won the 2017 and 2018 Female Prospect of the Year awards. "I miss him a lot," said Zulu's soft-spoken wife.