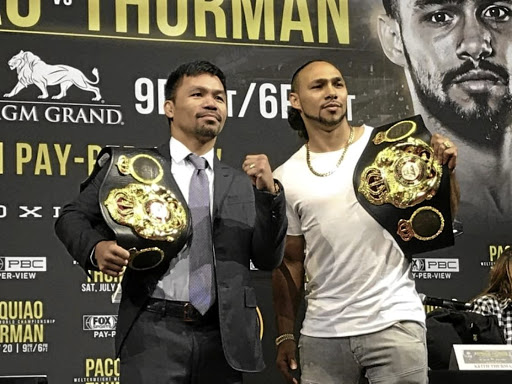 Even the most skilful boxers in the world must be disciplined, dedicated and be prepared to work very hard in order to realise their fullest potential.

That is what Mzonke "The Rose of Khayelitsha" Fana believes has kept Manny "Pacman" Pacquiao in the game even when he is 40 years old.

Mere mortals should listen up when Fana talks because the former SA and IBF junior- lightweight and SA lightweight champion boxed successfully until he was 42 years old.

Pacquiao is the first boxer in history to win major world titles in four of the eight "glamour divisions" - flyweight, featherweight, lightweight and welterweight.

The Filipino is the only eight-division world champion in the history of boxing, having won 12 titles. He has fought the best boxers in the world and boasts 69 wins, with 39 KOs, in 70 fights.

Did anyone wonder why boxing has so many "world" champions?
Sport
2 years ago

American Thurman, 30, has held the WBA, WBA Super and WBC welterweight belts. He is undefeated after 29 fights, with 22 knockouts.

Fana, who was renowned for his ramrod jab, quit the fistic sport in 2017.

He says Pacquiao's bravery has also been his best weapon.

"Manny is fearless, disciplined, dedicated and doesn't feel sorry for himself when it comes to working hard. That is actually what kept me in the game until I was 42," he said.

"Keith is a good boxer - don't take anything away from him - but I put my money on Manny to win their fight."

Pacquiao told BoxingScene: "Keith Thurman is going to be surprised by what he sees from me. I have heard what he has said. The more trash talks the more his insecurities show. I know he senses what is coming his way."