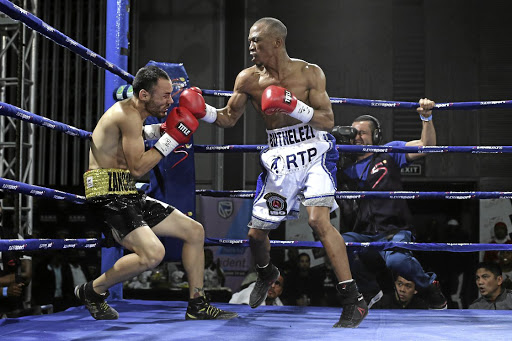 IBO junior-bantamweight boxing champion Gideon "Hardcore" Buthelezi kept his belt as he scored a first-round knockout win over Mexican Adrian Jimenez without breaking a sweat at the weekend.

The bout was the main attraction of Xaba Promotions and Events' impressive international tournament at East London's ICC Hall on Saturday evening.

Respected referee Deon Dwarte from Cape Town saw no need to count after the Filipino had finally succumbed to Buthelezi's avalanche of power punches to the head, after being weakened by a left hook earlier. Dwarte just waved the bout over.

The left-hander from Boipatong in the Vaal was ushered to war by new trainer Lucky Ramagole, who took only three weeks to prepare the boxer for the world title fight.

While the general fight public and diners at the box-and-dine got value for their money, the awards committee of Boxing SA must have recorded that stunning demolition act for nomination for the 2019 knockout of the year award.

He lauds Ramagole for preparations
Sport
2 years ago

Earlier in the tournament, Jackson "M3" Chauke proved too strong for Sihle "The Sting" Jelwane when the domestic flyweight holder knocked out his challenger in the first round.

Chauke from Tembisa, who is trained by Damien Durandt, stopped Jelwane in five rounds for the WBF International title in March last year in Benoni.

Durandt's other charge Emmany Kalombo, who holds the WBF International junior-middleweight title, almost sent Cristian Ndombassy through the ropes with a bad knockout in the sixth round.

The night, however, belonged to Yanga Sigqibo, who showed great improvement in his flawless performance throughout 12 rounds to easily retain his WBO Intercontinental junior-bantamweight belt against Joseph Ambo of the Philippines.

The local boxer is trained by Miniyakhe Sityatha.