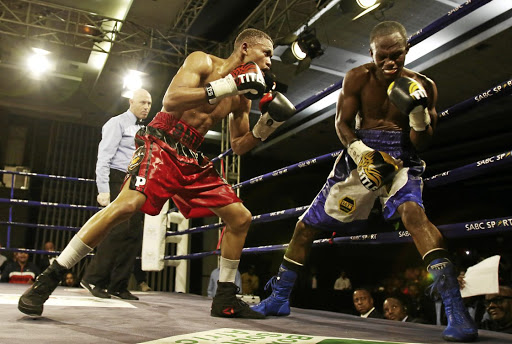 Ludumo Lamati, left, will be fighting in SA for the first time since 2017.
Image: Michael Pinyana/ Daily Dispatch

Award-winning matchmaker Luyanda Kana has done it again, putting together a boxing line-up at the Orient Theatre on July 28, under the banner of Rumble Africa Promotions (RAP), that promises to be a celebration befitting of the stature of Nelson Mandela through his beloved fistic sport.

The boxing fraternity felt it would be an injustice not to have tournaments to honour the man whose undying love for boxing not only opened doors for locals to contest world belts, but also for the country to host some of the greatest bouts.

Kana, 55, is a former death row prisoner. He and 32 others from the ANC and PAC were jailed for serious "political" crimes on the eve of SA's new dispensation. They were pardoned in 2002, and Kana got drawn into matching boxers.

He is passionate about putting together thrilling boxing matches, and saw off stiff competition from veteran Reuben Rasodi (who was buried yesterday) and the emerging Abbey Mnisi to win the accolade of 2017 Matchmaker of the Year on SA boxing's glamour night.

"Our upcoming event is one hell of a tournament in terms of matchmaking," said RAP CEO Nomfesane Nyatela.

While the boxing fraternity is still trying to come to terms with Maemu's loss to a boxer a supposedly inferior opponent, Mutavhatsindi jets off to ...
Sport
3 years ago

A matchmaker's job is to create an interesting contest that gives crowds a thrill, and Nomfesane said that is exactly what will be in store for fans next weekend.

The tournament is dubbed "Home Coming" because RAP will be welcoming home UK-based Ludumo "9mm" Lamati, the boxer from Mdantsane who has not fought in SA since he relocated in 2017.

Amazingly talented Luyanda Ntwanambi, 20, will test his prowess against experienced Fikile Mlonyeni for the WBO Africa flyweight belt. Ntwanambi is undefeated after seven fights while Mlonyeni has 14 victories after 19 bouts.

Another undefeated 20-year-old, Sive Nontshinga, will put his career on the line when the seven-fight novice defends his IBF International junior flyweight belt against durable Siyabonga Siyo, who has traded leather with the likes of Hekkie Budler and Simphiwe Konkco.

Nyathela said fans will part with R100 to gain entry.