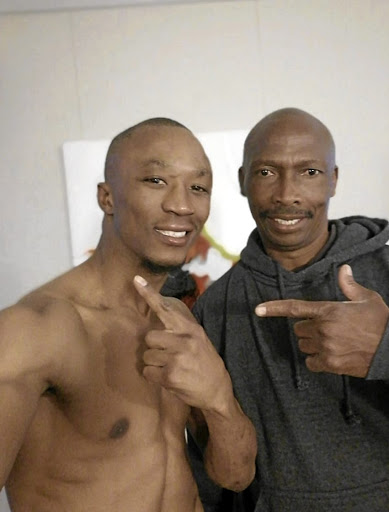 Lucky Ramagole may not have been successful as a boxer, but he's a brave man who should be applauded for his fearlessness.

The fight will be staged jointly by Zbash and Xaba Promotions at East London's ICC Hall.

Most trainers say eight weeks is the appropriate time to prepare a boxer for a fight.

Jimenez, 25, is a relatively inexperienced Mexican who has 13 wins in 16 fights. Rated No 28 by the IBO, he remains an unknown entity to both Buthelezi and Ramagole.

President has jab at glut of current 'world' titles.
Sport
2 years ago

Buthelezi said it had been difficult to prepare for someone who is a closed book, but Ramagole has confidence that the left-handed Buthelezi will reign supreme.

"His fitness levels were very good when he came to me three weeks ago. I just had to work on the strategy side of him and fine-tune few things, and he responded positive to my methods," said the man who has done wonders with Melissa Miller, guiding her to winning the SA bantamweight female belt.

Ramagole comes from a family of boxers. His uncles Mike Ramagole and Edison Ramagole were SA welterweight and Transvaal flyweight champions, respectively.

Lucky guided Lehlohonolo to be a hot property until the trainer's bravery misled him in accepting a fight against then SA flyweight holder Moruti Mthalane who stopped Lehlohonolo within the distance in 2009.

Buthelezi has not had a trainer since Elias Tshabalala became a promoter. He joined Sean Smith but their association did not long.

Buthelezi said: "I approached Mr Ramagole to help me. I've had quality sparring from his gym in Orlando and there will be no excuses."

Buthelezi happy as his purse is settled