'M3' too fast for Jelwane - trainer 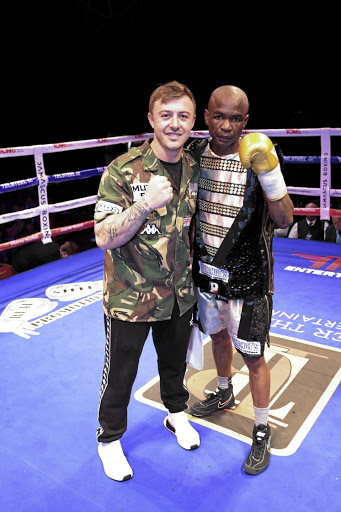 Fresh from guiding Ilunga "Junior" Makabu to the WBC Silver cruiserweight boxing belt victory, trainer Damien Durandt has warned that his charge Jackson Chauke will be too fast and furious for Sihle "The Sting" Jelwane on Saturday evening.

Nicknamed "M3" after a high performance version of a German racing car by trainer Nick "Mthakathi" Durandt, Chauke is the domestic flyweight champion.

He will make the voluntary defence against the Free Stater.

"In all honesty, Sihle does not have appropriate tools to derail Jackson from the journey to stardom," said Damien.

"Jelwane's camp believe they lost to Chauke by a stoppage, because of a shoulder injury. We put him down in round one and stopped him in five. We shall see if there will be any difference. I believe that the result will be the same - a win for Chauke. I don't think Jelwane has tools to beat Chauke."

Chauke could not win the same belt when he was trained by Nick, but the boxer eventually captured it under Nick's son Damien in April with a ninth round stoppage of Thabang "Pretty Boy" Ramagole. That was Chauke's 13th KO in 17 wins against a loss and a draw.

Damien's other charge - Emmany "The General" Kalombo will take on Cristiano Ndombassy over eight rounds.

These bouts will form part of the Zbashy and Xaba Promotions international tournament at East London's ICC Hall. Gideon Buthelezi will headline the bill in defence of his IBO junior bantamweight belt against Mexican Adrien Jimenez.