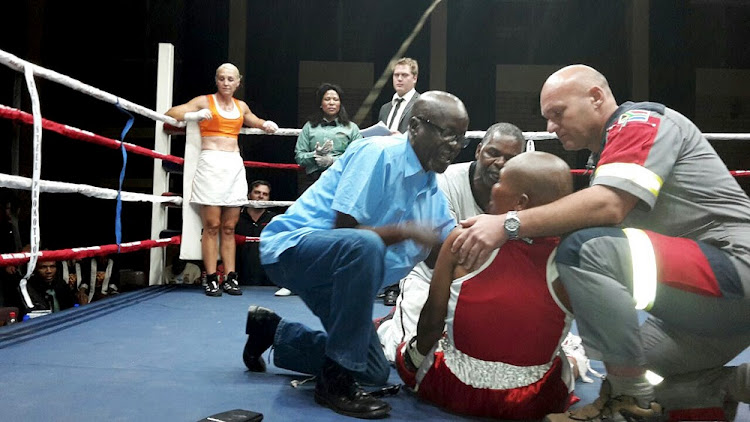 Dr Solly Skosana and trainer Stanley Ndlovu attend to Phindile Mwelase. She was in a coma for two weeks before she passed away on October 25 2014.
Image: Pumeza Zinakile

The death of 28-year-old Russian boxer Maxim Dadashev this week, after fighting for his life in hospital with severe brain damage following his brutal defeat to Subriel Matias in the US last Friday, has triggered an outcry from pathologist Dr Solly Skosana for an improvement in avoiding injuries in the fistic sport.

Tragedy struck local boxing in 2014 when female boxer Phindile Mwelase fell into a coma after being knocked out by Liz Butler in Pretoria. Mwelase died in a fortnight. Skosana was ringside physician.

Skosana is one of the three doctors who actually examines boxers before and during tournaments.

It was reported that Dadashev collapsed as he made his way out of the arena after suffering a subdural haematoma (bleeding on the vein beneath the skull).

Skosana said yesterday: “We need to be observant about injuries in boxing. We need to focus on boxers in their corners as to how they respond after a knockdown or after absorbing severe punishment to the head. Subdural haematoma results from receiving blows to the head.

“Continuous accumulation of blood within the skull as a result of bleeding may result in fatality if not detected promptly. What I suggest is that doctors at a fight, in addition to examining boxers prior to the event, need to continuously observe boxers between rounds in their corners.

“The telltale signs may be detected … they must be examined quickly and if signs of injuries are detected, then the boxer needs to be sent to the hospital urgently to be treated further by a neurosurgeon.”

Skosana said referees also need to be sensitised to injuries which may occur in the ring. “Should they be suspicious of an injury, they need to call the ringside doctor immediately. In addition, all boxers who have received severe punishment to the head should be referred for a brain scan.”