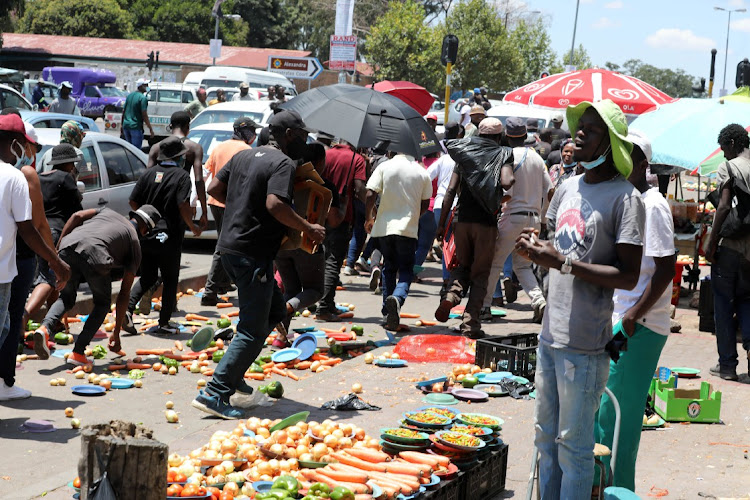 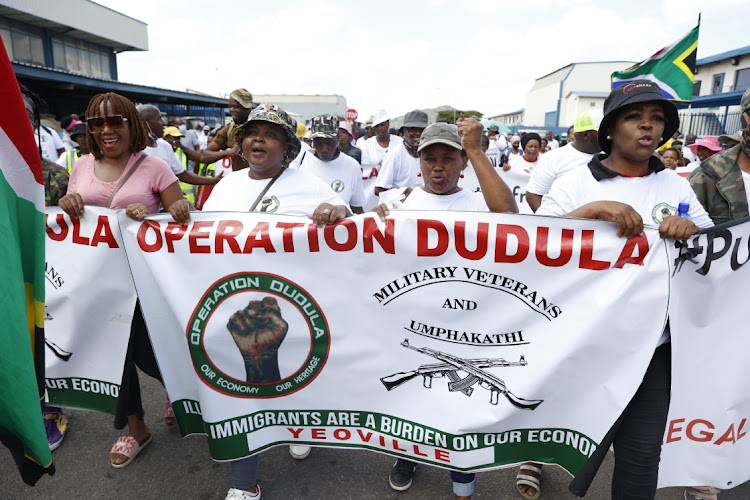 Operation Dudula movement marched in Rosslyn, Pretoria to give out memorandums of demand to factories like Afrit Trailers and Praga Technical urging them to hire local people.
Image: Thulani Mbele

Holomisa said the fallout from clashes between locals and foreign nationals could be "devastating" and lead to neighbouring countries demanding SA ...
News
2 months ago

Though they claim to be wanting to rid the country of drugs and human trafficking, which they claim foreign nationals are responsible for, they don’t seem to have the appetite to attend to the issues in Sandton. Curiously, they are brazen when operating just across the freeway in Alexandra. Why, when there have been reports of foreign nationals committing crimes and dealing with drugs in Sandton, do outfits like Operation Dudula not go there?

The answer is simple: Operation Dudula and xenophobes in general target poor working-class foreign nationals who are extremely vulnerable. They target those who are employed in precarious jobs, who live in informal settlements or rent shacks in the backyards of township houses.

They target owners of small spaza stores, some of them so poor that they literally sleep on the floors of their spaza shops. These disenfranchised men and women who are trying to make a living under the most difficult of circumstances are the people whom Operation Dudula wants expelled from SA.

Operation Dudula doesn’t see rich foreign nationals, even the undocumented and criminal ones, as the problem. They are shielded by the privilege that living in Sandton affords them. Merely by being residents of one of the richest areas in SA, the undocumented and criminal foreign nationals are spared the indignity and dehumanisation that is suffered by poor working-class immigrants.

This illustrates that Operation Dudula and xenophobia in general is not only about hatred for foreign nationals but rather, hatred for a particular social and economic class of foreigners. The undocumented Somali who is running a spaza is deemed more dangerous than an undocumented Turkish or German who sells cocaine to a middle-class clientele at exclusive nightclubs.

Operation Dudula members gathered in Rosslyn, Pretoria, on Tuesday to hand over a memorandum against the employment of illegal immigrants.
News
1 month ago

The problem is therefore not foreigners, but poor ones. The problem is Black and brown foreign nationals. They’re an easy target because they have limited options and virtually no avenue for assistance. The ones who roam the streets of Sandton, many of them white, are untouched by violence, their businesses spared any inspection.

Operation Dudula might appear militant and radical on the surface but in reality, it is a formation of people who have misdiagnosed SA’s problems and are cowardly targeting vulnerable people to fashion a senseless solution to them.

It is a formation that can’t confront capital and which, as a result, exerts energy on mothers selling diskopas (multicoloured popcorns) on the streets. I can’t think of anything more regressive than this.

Over the past few years there have been numerous raids on homes in Sandton. Drugs and contraband amounting to millions of rand are often found in a single raid.

Many people might recall the famous case of Gauteng police and the provincial government swooping on a multi-million rand drug laboratory in Kelvin, a suburb within Sandton, and arresting three foreign nationals.

It was one of numerous such cases. But drugs aren’t the only criminal activity that’s popular in Sandton. Just a few months ago, the Hawks busted a human trafficking and prostitution syndicate operating in a Sandton suburb. Two men, both foreign nationals, were arrested in connection with the operation. At the time of this particular raid, one of the men was already in prison after having been arrested in May 2021 while trying to traffic a teenage girl.

Criminality is rampant in Sandton. There are also a sizeable number of foreign nationals – some documented and some not. Despite this, Sandton doesn’t experience the kind of xenophobic violence that we see in some parts of Johannesburg. Vigilante groups such as Operation Dudula, who operate boldly in townships and the inner city, do not conduct their operations in Sandton.