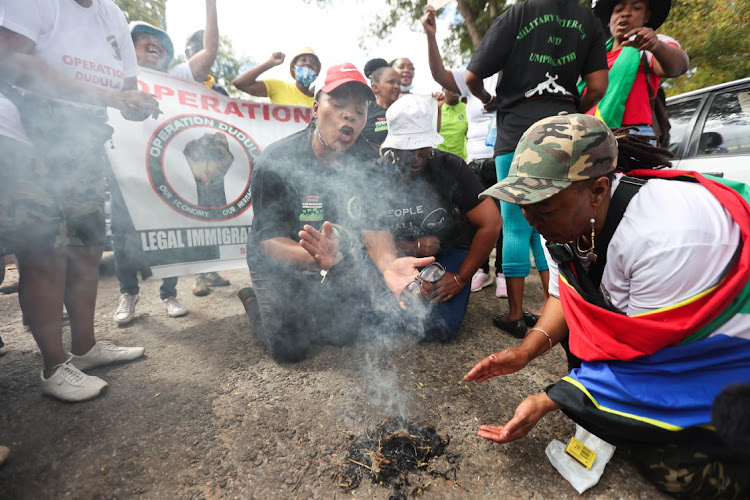 There was a heavy police presence in and around the Roodepoort magistrate's court on Monday ahead of the appearance of Operation Dudula front man Nhlanhla "Lux" Dlamini who faces charges of house breaking, assault and intimidation.

Dlamini was arrested on Thursday evening after the EFF and its member Victor Ramerafe lodged a criminal case against him over the raid the controversial group conducted at his home in Dobsonville, Soweto,  as they accused it of being a drug den.

He spent the weekend in custody at the Johannesburg Central police station after attempts by his legal team for him to be released on bail were unsuccessful.

Scores of people supporting Operation Dudula were turned away when they gathered in Durban on Sunday, unaware that the KwaZulu-Natal launch of the ...
News
4 months ago

Hundreds of demonstrators took to the streets in protest against xenophobia and Operation Dudula on Saturday.
News
4 months ago

Operation Dudula and Patriotic Alliance supporters staged a picket outside court as they called for Dlamini's release.

Fencing and barricade tape was used by the police to ring-fence the court’s perimeters as more crowds made their way to the court precinct in support of Dlamini.

Operation Dudula has been accused of vigilantism over its campaign against illegal immigrants and those it accused of dealing in drugs in townships.

The group has, however, insisted that it was not engaging in illegal activities and was escorted by SA Police Service and Joburg Metro Police Department (JMPD) members during its activities.

A large media contingent camped outside the courtroom where Dlamini was set to appear.

Before his arrest, Dlamini denied allegations that he had assaulted Ramerafe or that the group had broken into his house in his absence and searched for the alleged drugs.

Ramerafe accused the group of breaking down window burglar bars and vandalising his furniture during the alleged raid, which Dlamini also denied.

He told Sowetan he had a full video of the raid and that he would release it to vindicate himself and other Operation Dudula members when the time was right.