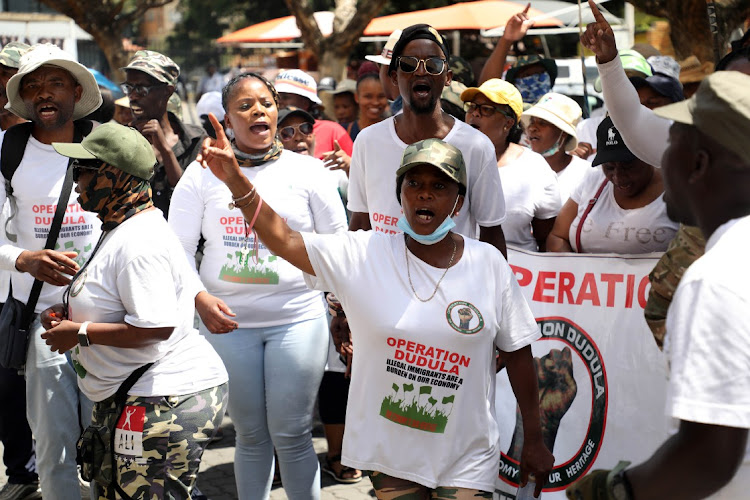 Members of Operation Dudula during one of their campaigns allegedly to root out illegal immigrants. Organisations against xenophobia have slammed government for failing to nib intolerance against foreign nationals in the bud.
Image: ANTONIO MUCHAVE

The coalition of organisations in support of the Kopanang Africa Against Xenophobia movement have slammed government and law enforcement's  failure to quell growing intolerance against foreign nationals.

The organisations, which included union federation Saftu, the United Front, the Treatment Action Campaign and the Foundation for Human Rights took to the streets on Saturday and marched from Peter Ross Park in Parktown through Braamfontein to the Johannesburg Central police station.

This is where Operation Dudula front man Nhlanhla “Lux” Dhlamini remained in detention after EFF Soweto activist Victor Ramerafe opened a case of house breaking, assault and intimidation  against him on Wednesday following a raid at Ramerafe's house as the group accused it of being a drug den.

Reading the memorandum, Kopanang spokesperson Janet Munakamwe said the government had to swiftly act to ensure the end to the activities of Operation Dudula which were aimed act evicting alleged undocumented immigrants from townships and from informal trading spaces.

“We call upon the SA government and the police service and the police to show leadership by acting against those fueling violence and xenophobic acts, including taking immediate measures to address the unlawful acts and hate speech being committee by Operation Dudula,” Munakamwe said.

Operation Dudula had initially threatened to stage their own march on the same route, which was viewed as an attempt to disrupt the anti-xenophobia campaign.

Johannesburg United Front chairperson Trevor Ngwane said SA had to send a clear message that it was against the growing intolerance against foreign nationals perpetrated by the Dudula groupings and called on the police to ensure that they were not allowed to continue with their operations.

“We want to make clear to SA that we are against xenophobia. Xenophobia is a divide and rule tactic of the imperialist. Comrades remember the way we won our freedom was through maximum unity,” Ngwane said.

He said while many South Africans remained poor, they had to work together with foreign nationals in their struggle for a better life instead of fighting them as he called the push against immigrants as “bourgeoisie tactics to divide us”.

“Many of us are still hungry and don’t have houses. It means our revolution is not finished. These people of xenophobia are derailing our revolution. Let us move forward with our brothers and sisters from Mozambique, Malawi, Zimbabwe, Namibia, Somalia, Ethiopia, Ghana, Pakistan and Bangladesh. We believe in international working class solidarity,” Ngwane said.

Kopanang had initially planned to stage their march on March 21 on Human Rights Day but the Joburg Metro Police Department refused to issue a permit for it, forcing the movement to resort to the court in a bid to overturn it on Thursday, paving way for the march.

The organisation has blamed the government for failing the poor by not ensuring economic development and job creation, which was resulting in foreign nationals being used as a scapegoat for the country’s compounding economic problems.

A small group of Operation Dudula supporters also staged their own picket on the police station calling for Dlamini's release, with the patriotic alliance backing their cause.

Dlamini is expected to apply for bail on Monday.

Operation Dudula's Durban wing was on Friday denied permission to hold a march on Sunday.
News
3 months ago

Operation Dudula leader Nhlanhla 'Lux' Dlamini's bail application will be heard on Monday, meaning he will remain in custody over the weekend.
News
3 months ago
Next Article