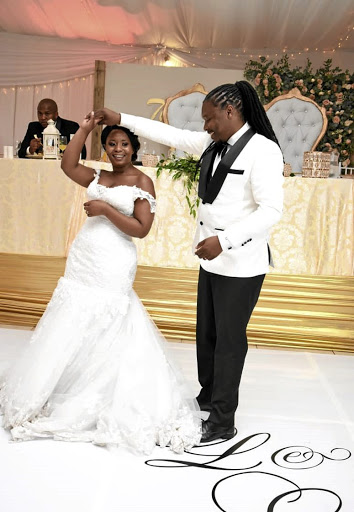 Liza and her husband Lonwabo Mbana dance at their wedding ceremony.

The day Liza Ndleleni, 30, checked into her Eastern Cape hometown of Mthatha, via Facebook, after being away for a year, was the best day of her life.

The medical doctor had been doing her internship at Mahatma Ghandi Hospital in Durban, and marriage wasn't on her list of to-do things.

"I had to notify my friends that I was back in town [in 2014]. It turned out to be the most beautiful day of my life. My friend Solethu Maphipha, who I went to school with, saw my check-in status and invited me for lunch at Mike's Kitchen. Little did I know my future husband was sitting there watching cricket."

Thirty-five-year-old electrical engineer Lonwabo Mbana, who was friends with Maphipha, caught her eye. "He asked me for my number after lunch and I was happy to do that as he had made a good impression on me while we had lunch.

"At the time, all I could think of was being his friend. But later, I felt that I loved this guy and he told me that he was also in love with me," she laughs.

Four years into the relationship, Mbana told her he was ready to visit her family and pay lobola. "I laughed, but had to take it seriously as he repeated the request weeks later. I never had marriage on my mind ..."

Nonetheless, she accepted and Mbana paid lobola in March last year. They then had a "tsiki" ceremony (a Xhosa traditional ceremony celebrating their union) where the wife is given a new name by the groom's family. The Mbana family named her Lona.

In December 2018, they had a garden wedding at the Dan's Country Lodge and Events Centre in Mthatha.

"It was the most perfect day of my life, especially when I walked down the aisle and saw him patiently waiting for me there. I was so happy! He always loved me, I could tell in our four years of dating. Trust me, nothing has changed, we are still happy," she says.

Maphipha was chosen as their best man as he brought the two together. They went to Mbana's home in Mthatha on the Sunday for the traditional wedding, where she was finally handed over as Mrs Mbana.