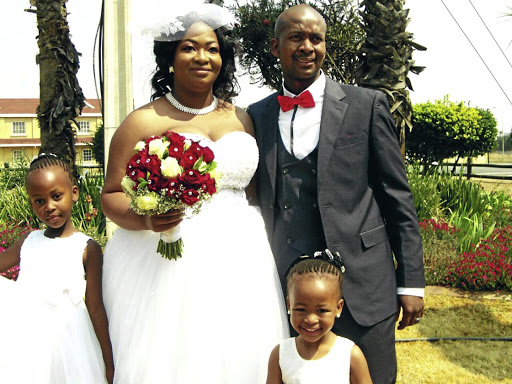 Lerato and Mbulelo Motsheare at their wedding ceremony this year.
Image: Supplied

There's a bro code among boys where they shouldn't dare date each other's sisters.

But the chemistry between Lerato and Mbulelo Motsheare was so strong that they went against this rule. Her brother and now husband stopped being friends for a long while. But like all romantic stories go ... all is well again.

Lerato says Mbulelo would come into their home and send signals that he wanted to date her. But she hesitated because she was scared of her older brother. The 24-year-old from Randfontein said she had a hard time dating Mbulelo, 29, from October 2011 up until this year when they tied the knot.

"He and my brother were the best of friends. But he persisted with me and assured me from day one that he is very serious about me and told me that he wants to date me. But to my brother, dating his friend was a huge issue. He threatened to tell my mom that I'm dating an older guy, that the guy is not good and he is a player," she said.

How a Zulu prince got hitched
Lifestyle
3 years ago

Mbulelo, however, proved his naysayers wrong and lived up to his promise of being faithful and loyal. Two years into the relationship, he paid lobola to her family, which traditionally meant they were married.

The friends also thankfully made peace. The couple married over Heritage weekend on September 22 and 23, this year.

She says it was a two-day affair in Bekkersdal, West Rand, and thanks her mom for putting together the celebrations.

They had a colourful and rather unusual wedding cake.

She says the theme colour for the Saturday was red and blue, while on Sunday the white represented her white wedding gown, which she wore to church, so she incorporated all these colours into the cake.

But Lerato says after the festivities, she realised that being unemployed and married at a young age is not easy. "Unlike stealing time to see my boyfriend, I am now suddenly a wife and mother with more responsibilities," she says.