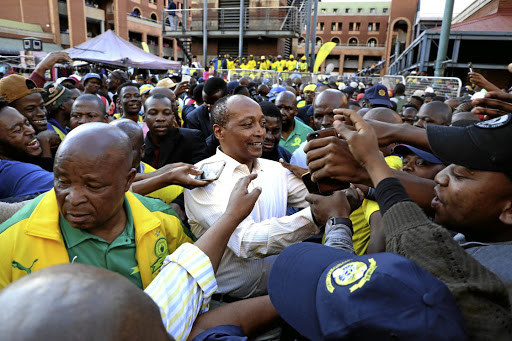 Mamelodi Sundowns fans in Tshwane came out in their numbers yesterday to witness their team parade the Premiership trophy they won at the weekend.

The Brazilians painted Tshwane yellow, while in contrast Soweto was left green with envy after the Buccaneers were pipped to the title on Saturday.

Sundowns held an open-bus parade with their trophy in the Pretoria CBD, also stopping in Mamelodi, Atteridgeville, Soshanguve and Hammanskraal. The squad was ferried in two busses that passed through different parts of the country's capital city before converging at Sammy Marks Square in the CBD for the main event.

The starting point of the parade was at the club's spiritual home, Mamelodi, where hundreds of fans came out to see their heroes. This title win in particular means a lot to the supporters following a neck-and-neck race with Soweto giants Orlando Pirates.

Having delivered eight trophies in seven years for Sundowns, it is no surprise that Pitso Mosimane's phone has been ringing off the hook with offers ...
Sport
2 years ago

"I would like to thank all of you, the people of Tshwane, for standing behind the team," Motsepe said. With Downs fans famous for their spirited singing, the hundreds that came to the city centre did not disappoint.

And indeed, the billionaire has showered the club with love and has spent perhaps hundreds of millions of rands on it since he bought it more than a decade ago.

In his parting shot, Motsepe challenged the team to win the CAF Champions League again. "As you know, the big one is the Champions League. I hope we can once more become champions of Africa."