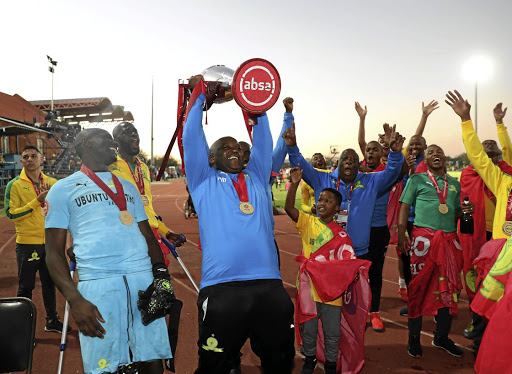 Neither their soured relations with the PSL, the point's deductions debacle or their travails in the Africa competition could stop Mamelodi Sundowns as they were crowned Absa Premiership champions here yesterday.

Title number nine for Sundowns will not only be remembered for their battle with Orlando Pirates in the race, but for their tussle with the football organisation led by Irvin Khoza.

For the Buccaneers, it was too little too late as their 3-0 win over Polokwane City in Soweto was not enough.

Downs have had no less than six disciplinary cases with the PSL, including Pitso Mosimane's scuffle with a security guard and the misbehaviour of fans in February against Wits.

The Tshwane giants left nothing to chance after a 1-0 win courtesy of a goal from Phakamani Mahlambi before half-time.

There were scenes of elation for the victors and anguish for Free State Stars, who were relegated after the 1-0 loss.

Ea Lla Koto drop down to the National First Division (NFD) following a poor season. There was mixed emotions for both sets of fans who packed the small stadium to the rafters.

Although this the fourth league title for Mosimane, it is the first that has come in back-to-back seasons.

Of all their nine league titles, this one is perhaps the least savoury. The point deduction saga has brought into question the legitimacy of the 2018-2019 championships and has brought the Premier Soccer League (PSL) into disrepute.

The PSL has appealed for an arbitration to overturn the decision not to dock Downs a point for fielding Wayne Arendse illegally against Wits back in October.

After the final whistle the players breathed a huge sigh of relief as they knew that 59 points would be enough to remain two points ahead of Bucs who are in second place.