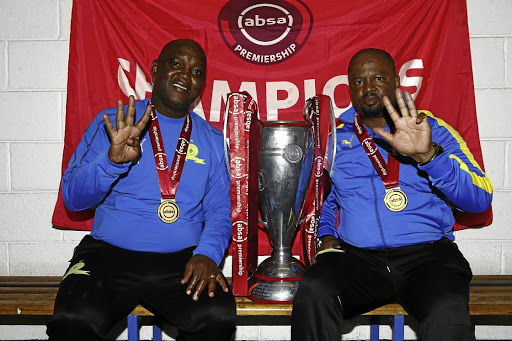 Having delivered eight trophies in seven years for Sundowns, it is no surprise that Pitso Mosimane's phone has been ringing off the hook with offers from the Middle East and other African clubs.

"I am humbled, especially [by offers] from the North Africans. They have given me respect and know about me.

"Even this week I got a call from Qatar. If it was about money then I would have left. But I don't like my CV to have many different clubs. I love Sundowns, I am happy here."

Since his arrival in 2012, he has won four league titles, the CAF Champions League, CAF Super Cup, Nedbank Cup and the Telkom Knockout. The Brazilians once again proved that they come second to none in SA football after clinching their ninth Absa Premiership title.

On the final day of the season on Saturday, Downs secured a 1-0 win over Free State Stars in Bethlehem to clinch the title, thanks to Phakamani Mahlambi's goal.

"This is an emotional league title because of all the issues we have had this season with the disciplinary matters and I created many enemies," he said.

"It's been a long season that had two Champions League campaigns, so I am happy that we have delivered a trophy."

What is most astonishing about this championship is that they did it with perhaps their least potent attack in the past seven years. Most teams would be limping after losing Percy Tau and Khama Billiat at the same time, but not Sundowns.

What should make their challengers even more afraid is that Mosimane has promised that they will be stronger next season. "I think next year we will have a better team than this one. It was a team under construction.

"Did I think this team would win the league? No, I didn't think so because we did not score enough goals. I mean, I used Lebo Maboe the whole season as a striker and he's a midfielder."

Coach Pitso Mosimane believes the bragging rights, plus the financial incentives the Champions League offers, makes it all worth it.
Sport
2 years ago

Mamelodi Sundowns coach Pitso Mosimane has asked his players to “go for it” when they take on Free State Stars in their last match of the season at ...
Sport
2 years ago

Mosimane hopes Baxter understands where ‘Sundowns’ players 'are coming from’

Pitso Mosimane has urged Bafana Bafana coach Stuart Baxter to carefully manage Mamelodi Sundowns’ players in the buildup to the Africa Cup of Nations ...
Sport
2 years ago
Next Article