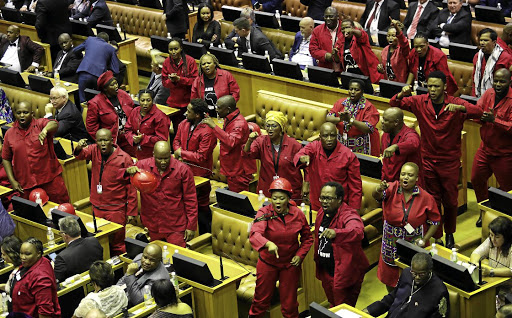 Those among us who called for Zuma to fall but cautioned against the Nazi stormtrooper mayhem the EFF was introducing to our parliamentary culture were dismissed as agents of a decrepit elitism.

There is something political scientists call "political culture". It refers to the way a specific society conducts its political business.

For example, when some Americans feel that Donald Trump must fall, they don't wear red overalls and cause chaos in their parliament; they instead initiate a formal impeachment process.

As champions of the #TrumpMustFall movement, the Democrats selected from their ranks the best brains to convince the American people why they think Trump must fall.

On the other side, the Republicans also deployed their sharpest intellectual tools to defend their man. Even the man himself was given the right to bring in lawyers to come and convince senators as to why the conduct of their client did not constitute an impeachable offence.

In the end, Trump was not impeached. Some Americans felt embittered afterwards, while others were gleeful. But the whole spectacle embodied an admirable democratic dignity.

Such is America's political culture. That is how Americans conduct their political business.

What we witnessed in Cape Town on Thursday last week is typical South African political culture. None among us must forget that we are not Americans. We are South Africans.

When we feel that a former president should not have been invited to parliament, we wear red overalls and cause chaos in parliament.

When we feel that a minister's investigation in state-owned companies are getting close to revealing what we have stolen, we wear red overalls and cause mayhem in parliament.

We do all that in the name of democracy. Indeed, the Greek philosophers who invented democracy did not have people like us in mind when they envisioned the system.

But there was a spark of philosophical brilliance in that whole parliamentary chaos.

One of the members asked a profound rhetorical question: "How can a minority prevent all of us from listening to the president?"

The ANC MP who wore a white tuxedo jacket and dubbed "Our Perfect Wedding" during the State of the Nation Address is EFF leader Julius Malema's ...
News
1 year ago

That is the question. Those in South Africa who protest against their inclusion in the "us" that refers to those who caused chaos in parliament on Thursday have a question to answer: How can we redesign South Africa's parliamentary system so as to prevent a minority from destroying the image of a majority?

The liberal philosopher, John Stuart Mill, wrote about how to tame "the tyranny of a majority".

The drama in our parliament reminded us that ours is a truly unique problem: how to tame the tyranny of a minority.

How about declaring the EFF South Africa's enemy No. 1?

In Germany, EFF-like conduct has been outlawed. You cannot practice Nazism there without going to jail.

Many years ago when I was a student at the University of Venda, we battled with the same EFF-like chaos in our student parliament. Solution? We passed a law that forced every student parliamentarian to wear a tie.

Our suspicion was that a sane human being wearing a tie would not behave the same way Julius Malema behaves when he is dressed in red overalls.

Who knows - maybe the EFF clowns would not behave the same way if they were forced to wear a tie? Maybe red overalls breed madness.

If a tie does not work, we may need to ask Shamila Batohi to expedite VBS cases involving Malema and his fellow thug Floyd Shivambu. Would you shed a tear if these two young kleptocratic Hitlers of our time were to rot in jail?