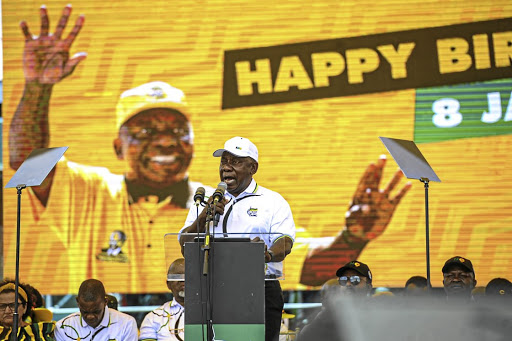 Everyone can see that our country has now reached the highest point of political crisis. The distance between current leaders and the people is unbridgeable.

The so-called leaders descend in their luxury cars on poor places like Kimberley to promise jobs they know will never come.

But people are not fooled. If the ANC failed to create jobs over the past 25 years, why must sane people believe the party when it promises to create jobs now?

The same applies to corruption. As President Cyril Ramaphosa was promising to fight corruption on the podium, Ace Magashule and DD Mabuza were smiling behind him, wondering what kind of green leaves their president had smoked - Durban poison, perhaps?

It would be impossible to genuinely fight corruption without arresting the entire ANC leadership - from municipal to national level. Remember Bathabile Dlamini's smaller-nyana skeletons?

Even the person upon whom some simpletons have bestowed sainthood, Ramaphosa, became president of the ANC through dirty money collected from all manner of dodgy characters in the private sector.

Those who believe that a serious commitment against corruption would be demonstrated by getting gangsters like Magashule behind bars must remember that Ramaphosa himself might need to go to jail for Bosasa and other dirty money.

Here is a simple truth: there is no angel in the ANC. There is no single leader there who does not know that the party uses money from criminals during and after elections. And yet the pseudo-saints continue unashamedly to dupe the gullible.

When you say the ANC is a spent force, its defenders are quick to retort: look at the opposition; is there a better alternative? They are partly right: the two largest opposition parties in SA are terrible.

Time has blown open the DA's camouflage. The party has now gone back to what it has always been - an instrument by which racists who are naturally suspicious of black people hope to defend white interests in SA.

Relying on the coloured vote in the Western Cape, the racists are very happy that they have finally gotten what Codesa refused to give them - a Volkstaat. Travel from Tsitsikamma all the way to Cape Town, and see for yourself if the Western Cape is not a white people's republic.

On the black side of the racist coin appears the EFF, a party of black Nazis who hope to profit from the ignorance of the masses.

Remove all the cover, and you will see that the thing called the EFF is an instrument of personal enrichment for two individuals - Julius Malema and his longtime buddy Floyd Shivambu. These two musketeers don't hesitate to collapse a small black bank or receive money from white cigarette smugglers.

You will also notice that the same two are the loudest in the campaign to remove Pravin Gordhan, because Malema and Shivambu know what Gordhan has done to close their looting channels in state-owned companies. The ANC defenders are therefore right: the DA and the EFF are not better. The one is racist, and the other kleptocratic.

But the idea that the fate of SA must be left in the hands of three disastrous parties is propaganda designed to benefit the same parties that have led us to our current crisis.

Why can't the black and white middle class come together to form a new political party to rescue the future of their children? If you need a manual for this, read Steve Richards's book, The Rise of the Outsiders: How Mainstream Politics Lost its Way.

In the 2019 elections, only 17.7-million people voted, compared to 18.6-million eligible South Africans who did not vote. There is your market, if you consider forming a new political party.

The trick, though, is how to make millions of hopeless people believe what a new party will offer. It must not be gimmicks. South Africans are sick and tired of lies.

The future of this country will not be in the hands of the ANC, DA or EFF. It will be in something not yet born. Where are courageous men and women to save us?

While Zuma harmed the economy through thieving, Cyril extends damage via inaction
Opinion
2 years ago
Next Article