Springboks a glimpse of what SA could become 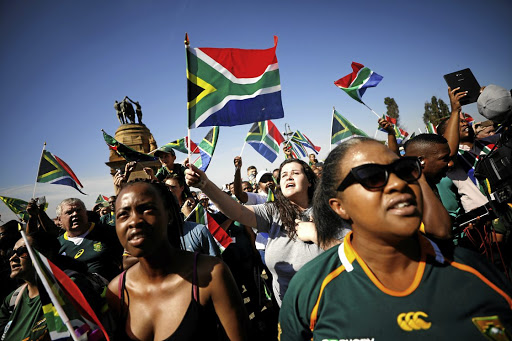 Those who have a clear picture of an ideal SA society must celebrate the Rugby World Cup victory.
Image: Mike Hutchings/ REUTERS

The Springbok Rugby World Cup victory has cast fresh light on what would happen if South Africans of all races were to unite and work together towards a common goal.

To a dull mind, the slogan "united in diversity" may sound like an oxymoron. To so simplistic a person, "diversity" comes across as apartness, not togetherness.

Nothing in the organic world would stand if things derived their true nature and perfection from apartness.

Jan Smuts's conception of a whole (in his holism theory) as a being greater than the sum of its parts is helpful in explaining how diversity plays an integrative role in the construction of strength.

What we call the "universe" is a sum far greater than the separate collection of the minute and gigantic things that constitute the whole.

In the social realm, liberal ideologues have produced a vast mass of literature extolling the virtues of apartness (individualism) - as if society perforce moves in a disintegrative direction.

Their logic is that human society is stronger when its social bonds are at their weakest: small government and small everything but the atomistic individual.

Had we followed a liberal logic, we would not have built a Springbok rugby team. The Springboks embody SA's national - not liberal - strength. The nation, as opposed to the individual, is the guiding spirit of national teams in the domain of sport.

It is not only liberals who are misguided by disintegrative conceptions; racial nationalists are too. Soon after the Springboks won the world cup, opportunistic racial nationalists - such as Mbuyiseni Ndlozi - rushed forth with scalpels to slice up our national rugby team into the loosest ensemble of incongruous races.

In the warped understanding of such racial nationalists, it is Siya Kolisi (possibly assisted by his few fellow black players in the team) who brought the Webb Ellis Cup to SA.

The problem with ideology is that it is always ready to discard facts, especially those that weaken or disrupt the coherence of its artificial logic. Thus to Ndlozi and his fellow travellers, white players in our Springbok team must be completely disregarded when black people celebrate the victory of the team.

That is how a disintegrative conception of diversity works in the realm of race consciousness.

In so myopic a mental universe, a SA that is bigger than the races that constitute its society cannot be grasped.

Author Zakes Mda says rugby used to be an integral part of the Xhosa culture, but was 'killed by apartheid.'
News
2 years ago

It is not difficult to anticipate the retort of the racial nationalists. They will tell us (as if we don't know) about the history of colonialism and apartheid that has produced racial divisions in our society.

That white racial nationalists have distorted the integrative logic of nature in our social affairs should not serve as an eternal jail in which our imaginative capacity and knowledge of the true nature of things must be incarcerated.

The victory of the Springboks should be celebrated not because the team represents the most perfect state of a truly integrated South African society, but because the team adumbrates the contours of the right social direction.

We celebrate the birth of a baby not because of the utility of babies in society, but due to our expectations that babies will grow and become important members of our families and society. And so must we hope and work to build on the encouraging foundation of our current Springboks.

Let ideological idiots howl in the wind of their misguided conceptions. We who have a clear social picture of an ideal SA society must celebrate the victory of our Springboks.