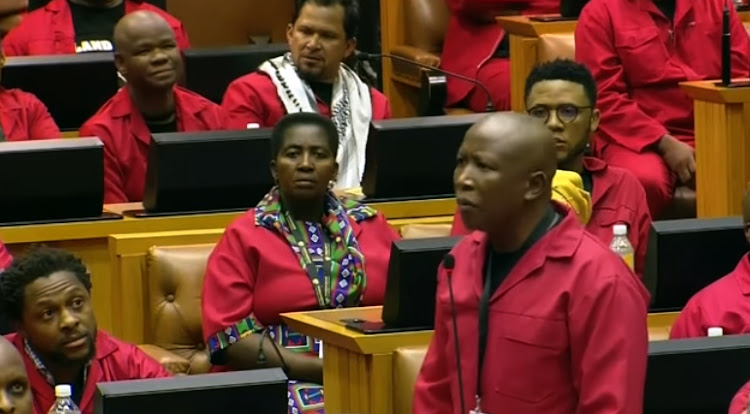 The EFF on Thursday disrupted the commencement of President Cyril Ramaphosa’s state of the nation address, demanding the removal of public enterprises minister Pravin Gordhan from his post.

LISTEN TO THE CHAOS:

“We call for an adjournment that the President must go outside and make sure that he makes an announcement to the nation that Pravin Gordhan is no longer a minister of this country. We cannot sit with him, we won’t sit with Pravin Gordhan not here. Pravin Gordhan must go,” Pambo said.

Before making the comment on Gordhan, Pambo shocked many when he ordered Ramaphosa to “please sit down”.

And on that day, a legend was born.

Starts with the filibuster on the issue of #PravinMustFall #SONA2020 pic.twitter.com/eZkKx5UPYw

Pambo said that there were millions of South Africans who were sitting in the dark because of the ailing state of the SOEs and said Gordhan as the minister was responsible.

“We cannot sit here in Parliament with millions of South Africans watching us when they know they are in darkness because of one man who has made sure that our state-owned enterprises are in a state of collapse,” Pambo said.

“Today, Eskom cannot keep light in our houses, today we cannot fly to Durban because there is a minister who is making sure that SAA is dysfunctional today we sit here with a minister that is working with white monopoly capital making sure that state-owned entities go to his friends."

The EFF last week warned that Ramaphosa’s speech would not go ahead should he not fire Gordhan by the time he takes to the podium.

EFF leader Julius Malema yesterday said state-owned enterprises (SOEs), including Eskom, have worsened under Gordhan. However, Ramaphosa has been reluctant to act against him.

Malema also pointed to issues faced by South African Airways, which has been placed under business rescue.

"If the State of the Nation Address is to be peaceful, Ramaphosa must do the honourable thing and fire Pravin Gordhan," Malema said.

Malema said Jabu Mabuza resigned as the Eskom board chairperson after Deputy President David Mabuza accused Gordhan, and the power utility executives, of misleading the president on loadshedding.

He said the EFF had taken a decision at its week-long plenary meeting to march to the department of public enterprise offices to demand Gordhan's resignation.

“"There were two people who misled the president - it was Pravin; it was Jabu Mabuza. An African [Mabuza] has fallen but the Indian [Gordhan] remains," Malema said.