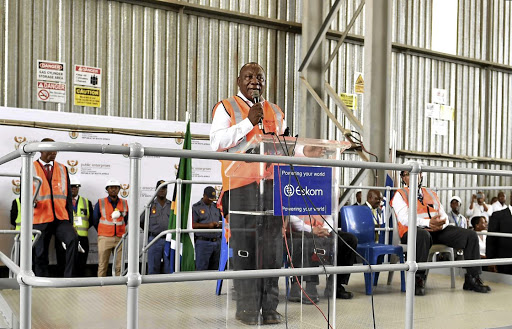 President Cyril Ramaphosa is more keen on public relations than doing the real hard work of being the president of the country and leader of society, the writer says. /Jairus Mmutle / GCIS

When Cyril Ramaphosa finally took over SA's presidency in 2018, many people heaved a sigh of relief.

As an educated billionaire with a pedigree in trade-unionism, the assumption has been that he is sophisticated enough to grasp the destructiveness of grand-scale corruption and lack of decisive action on key governance matters.

This generous assumption led to a sympathetic rationalisation of Ramaphosa's many years of complicit silence as his former boss, Jacob Zuma, continued to plunder and collapse state institutions.

The expectation was that, when he takes over, Ramaphosa would move swiftly to reverse the damage caused by his departed kleptocratic boss.

Those who harboured such generous expectations of Ramaphosa have been intolerant of those among us who warned of an impending disaster under a sweet-talker president who blows more English hot air than produces practical results.

It is now more than clear that Ramaphosa is a public relations-type of a leader who worries more about appearance and sound bites than taking bold decisions.

Anyone who is still hoodwinked by Ramaphosa's PR should talk to frustrated senior officials in state institutions. Even the white people who poured in money for Ramaphosa to buy the presidency of the ANC now wonder if their money would not have been better invested elsewhere.

AG's reports on corruption and looting by officials have become a meaningless ritual.
Opinion
2 years ago

As for the poor and the unemployed, the waiting continues. They see on television men and women dressed in suits, gathered in much-vaunted investment jamborees that promise to grow the economy and create jobs. While the poor and the unemployed don't understand economics, they know that investment conferences are meaningless to them, for they have never seen one job coming to their village or township because of a meeting held in Sandton.

As Christmas approaches, poor villagers and township dwellers await the return of their educated relatives to explain to them the meaning of South Africa's perennial, downwardly revised economic growth forecasts.

The poor hope finally to reconcile the much-trumpeted good news from Ramaphosa's investment conferences and the country's endless economic decline. Hopefully, the educated relatives from the city will not lie to their unemployed cousins.

Those who still have jobs are equally worried. News bulletins continue to announce impending retrenchments in this mine or the other steel factory. These days even employees of some state-owned companies receive half their salaries.

As the waiting continues, the language of business leaders is fast becoming less diplomatic, just as that of rating agencies has become blunter. They all demand decisive action from a lethargic Ramaphosa.

It is not as if Ramaphosa does not know what is to be done. He has been told by his own minister of finance, Tito Mboweni, that the solution to SAA's problems is to sell the thing. Mboweni has also told Ramaphosa to sell Eskom's power stations. And, what has Ramaphosa done? Nothing.

This brings us to the ironic similarities between Ramaphosa and Zuma. That Zuma was a drain on our fiscus even his defensive sons can now see. He bankrupted the state by thieving.

On his part, Ramaphosa is busy bankrupting the state by inaction. Someone must add up all the billions that Ramaphosa's government is pumping into the dark abyss of dysfunctional state-owned companies, and let us know how much the president is costing us.

Anyone daunted by such a frightening calculation should begin by focusing on the conservative commitment made by Ramaphosa to pump R23bn every year into Eskom. Indeed, we know from rating agencies that Eskom will need about R50bn a year to service its debt obligations.

Due to his imaginative bluntness, Ramaphosa continues to waste a rare opportunity to make history. That he did not create our current governance mess we all know. That is why he was showered with copious goodwill from the public. Alas, our goodwill has been flushed down the drain.

Maybe Ramaphosa should not visit chaotic countries like Lesotho anymore. He might need to go to Britain, to learn a thing or two about bold leadership from the grave of a woman leader - Margaret Thatcher.