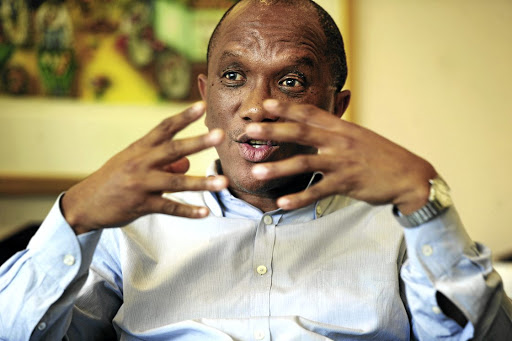 Despite the numerous warnings by auditor-general Kimi Makwetu about the poor state of the country's accounting practices, the looting never stops, says the writer.
Image: Gallo Images

In her book, It's Our Turn To Eat, author and journalist Michela Wrong tells the story of Kenyan anti-corruption investigator John Githongo.

At some point, Githongo sat the then president Mwai Kibaki down and told him if people think the president is "eating", then the war against corruption is lost.

Last week our auditor-general (AG) Kimi Makwetu appeared before a cynical South African public to tell us what we already expected - that the irregular expenditure of provincial and national governments has risen to a whopping R62bn.

We the public were cynical because we did not expect anything better from our government. Every sane South African knows that our government is corrupt. We therefore expect worse audit results.

There are people who have been hoodwinked into thinking the "new dawn" was the real deal. According to this wool over our face, things are now different in government.

The sad reality is that, other than the chief wool puller, nothing has changed. Officials in municipalities and provincial governments who have been looting public money are still there. Does anyone know a single municipal or provincial official who is in jail for corruption because of the so-called new dawn?

In fact, the municipal, provincial and national looters in government are now happier to have a chief wool puller who has a specious patina of credibility. As the chief wool puller goes around telling people about a non-existent new dawn, the looters continue with their sordid business quietly and undisturbed.

If you think all this is hyperbole, read the AG's report, and tell us where the new dawn was as irregular expenditure was piling up. What kind of dawn is this that never becomes midday?

The poor, well-meaning AG says the same thing, year in and year out. As soon as television cameras start rolling, we know the good-hearted AG will lament the lack of "consequence management" in the government.

The problem with sophisticated language is that ordinary people in poor communities don't understand it.

In simple language, the lack of "consequence management" means that when money is stolen in the government, the thieves are not fired or arrested. They are allowed to remain in their positions to loot more.

That is why, new dawn or not, every year we expect to hear the same thing from the AG. If there is no "consequence management", why must government officials stop embezzling funds through irregular expenditure?

Whether people choose to admit it or not, the looting of public resources in South Africa has become a culture.

Those who deny it are those who have benefited.
Opinion
2 years ago

The ruling mentality of officials in procurement divisions is to make hay while the sun shines. Public procurement has been turned into a mega private enrichment schemes for officials and their collaborators in the private sector.

Those in the tender space know that in most government departments, you will never get a tender without greasing hands. As virtuosos of the process, officials have mastered the art and science of doing it in such a way it would be difficult for a forensic investigation to find any wrongdoing.

The biggest problem, though, is not officials. It is politicians. Often politicians use officials to do corruption. That is why, even as politicians have the necessary authority, they never fire corrupt officials.

How do you explain the fact that irregular expenditure is never followed by the expulsion of the accounting officer - the director-general or municipal manager? It is precisely because the politicians are the chief lootocrats. As Githongo correctly observed, if the president himself is eating, the war against corruption is lost. In South Africa, we will never win the war for as long as our politicians continue to eat.