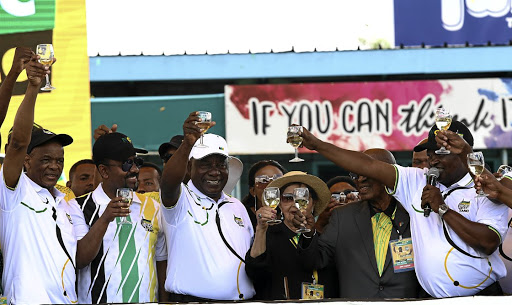 It's party time for President Cyril Ramaphosa and his ANC colleagues but the joy in Kimberley won't be enough to hide the picture of misery lying ahead for South Africans in 2020.
Image: Masi Losi

Last week the World Bank revised SA's annual economic growth forecast downward to 0.9%, citing loadshedding as the chief factor behind its dismal prognosis. That is the pessimistic tone of the new year.

The World Bank made its announcement two days before the ANC celebrated its 108th anniversary in the poor, nay God-forsaken, town of Kimberley.

Indeed, Cyril Ramaphosa's message there was the typical, parrot-like propaganda of "challenges" that the ANC shall overcome.

There is a popular animus among African nationalists toward Western institutions, particularly those which dare to paint a bleak picture of Africa's prospects.

Thus the World Bank and the IMF are always reminded of the devastating effects of their structural adjustment programmes of the 1980s whenever they venture a word about any African country.

It is one thing to be critical of Western pretensions of prescience, but quite another to dig one's head in the sand, hoping that what is will not be.

As the English saying goes, "If you forget that you are poor, your conditions will remind you." The African nationalists are perfectly free vindictively to dismiss Western institutions, but the truth remains that our country is in serious trouble.

The truth does not change on account of the disagreeability of its bearer. What is true remains true even when it is said by a person you dislike.

What, then, is the political truth we must contend with in 2020? It is the unpalatable fact that from being an asset in the early years of our democracy, the ANC has now become the single greatest liability to the people of SA.

There was a time when early crusaders against corruption were dismissed as armchair critics who did not want to acknowledge that the ANC was delivering RDP houses, electricity, water and other services to the "masses of our people".

Seeing Eskom technicians coming for the first time to connect electricity in their homes, it was tempting for the poor to ignore warnings from soothsayers who foresaw dark times ahead.

Today, tough conditions are reminding those who kept on swallowing ANC propaganda that they have been wrong.

The light bulbs are still there in the RDP houses, but there is no electricity. Even rich people are no longer enjoying their mansions. They are disturbed by the noise of generators that power up only a portion of their villas.

It is worse with water; no generator can produce it. How many people can afford to sink their own borehole?

When one tells people that we do not have water because of the ANC, the retort is that the ANC does not make rain.

If thieves did not steal money from water projects in places like Giyani, many parts of our country would have water today.

Instead of building dams, a corrupt government steals money. It is very sad in provinces like the Eastern Cape.

There are more water-scarce countries in the world that preserve water better than SA, simply because their governments are not as corrupt as the ANC. Israel is a case in point.

We do not have electricity in SA today, not because of insufficient resources. Various ANC cadres in the state and their accomplices in business looted and neglected Eskom until it collapsed.

When the World Bank says our country's economy will not grow because of load-shedding, it simply means that South Africans will suffer in 2020 because of ANC corruption. This is the truth that must be told without fear or favour.

Whatever Ramaphosa said in Kimberley, and whatever he will say in the State of the Nation Address, means absolutely nothing in a failed state that has no electricity.

If you are unemployed, who do you think will employ you without electricity? The question for most companies now is not how many people to hire; it is how many to lay off.

The problem with most analysts is that they tiptoe around the truth, using obfuscatory language like "challenges", "on the one and the other hand", and so on.

When a country is in crisis, the people deserve to be told the truth in plain language. Brace yourselves for a bumpy 2020 under the national liability called the ANC government.