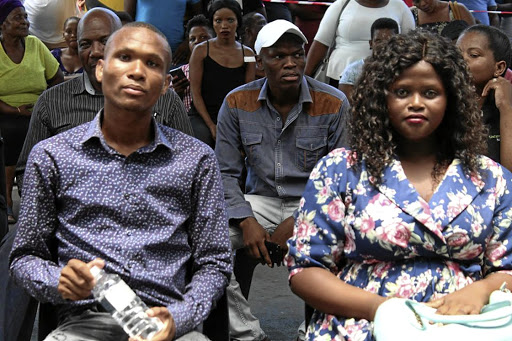 Taxi driver Nhlonipho Zulu and the woman he helped in childbirth, Ntombenhle Mthembu, at an event by Santaco. Zulu is the example of what this country can achieve if we cared for one another.
Image: Facebook

"After so many highly visible failures, public polls show that, as I've said, a majority of our citizens have lost confidence in our institutions and in government itself."

These words are not about SA; they were written in 2016 by former US secretary of defence Robert Gates about his own country.

With the rise of the buffoon called Donald Trump, things have gotten worse. Polarisation among Americans has reached unbridgeable levels.

It does not matter where one stands on the Trump fence, America has lost its ideational and practical attractiveness in the eyes of the world.

On the other side of the Atlantic, the post-Second World War threads that were used to stitch the European Union together are now wearing away. The bug of islandism has caused a strange isolationist madness in the United Kingdom called Brexit. People there have lost their minds.

For the greater part of the 19th century, Great Britain was a model of liberty, even though she remained a repressive imperialist power in the wider world. Life in Britain was a marvel for outsiders.

America took over the reins of global ideational leadership after the Second World War. Very early during the Cold War, it was clear that the Soviet Union was gigantic propaganda that condemned millions of people to death.

A KwaZulu-Natal taxi driver has been hailed as a "hero" after he helped a pregnant woman give birth in his taxi on Wednesday.
News
1 year ago

While Russian state-controlled media did everything to hide all good things Western, ordinary Russians and elsewhere in the third world wished they could have the refrigerators and washing machines American citizens were enjoying.

The idea of freedom, of wearing jeans and leading life as you wish, made many people in The World want to go to America. It was the same idea of liberty that inspired millions of oppressed people across the world to rise against despotism. People wanted to live freely.

Today, the impression outsiders have of both America and Britain is that of democracy gone horribly wrong. The dictatorships of China and Russia are now emboldened to ask if those who call for democracy mean the current madness in the West.

The fact that China is fast improving the standard of living of her citizens makes it hard for advocates of liberty to build theories that link economic progress to democracy.

Even white South Africans who have been entertaining the possibility of fleeing state failure in SA are no longer sure where to go.

Australia and Canada also do not offer the kind of lavish living that the majority of white South Africans are accustomed to. That is why those who left after 1994 have been coming back.

Parties have led South Africa to its current crisis.
Opinion
1 year ago

Look out there and you will see that with all our problems, SA is still one of the best places to live in on earth. When there is no electricity, the elite can afford a generator.

It is true that there are demagogues who have made it their business to widen the gap between blacks and whites in our country, but they have not succeeded.

In December, my family and I got stuck on the N1, 50km towards Colesberg, and a white family made a U-turn to come and assist a black family replace a burst tyre. Indeed, there are many cases of blacks assisting whites in our country.

The heart-warming story of Nhlonipo Zulu, the Kwa Zulu-Natal taxi driver who recently went beyond the call of duty to help a pregnant passenger give birth, proves that even a soul-crashing industry can never destroy the human spirit.

It is true that today's SA is broken in many ways, but, as Gates correctly observed, our country is not the only one grappling with collapsed public institutions.

What black and white South Africans must do is to come together to seek solutions to their country's problems. But such an effort must never include the political scoundrels who have brought us where we are.