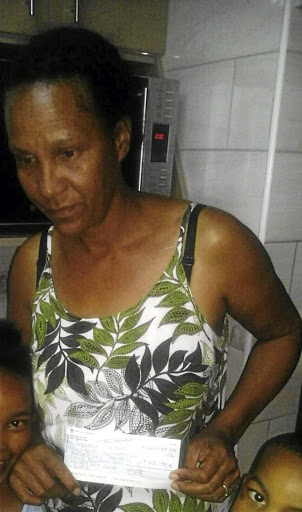 Karen Wheats, who recently accused Siphiwayinkosi Mchunu of SSS Mchunu Attorneys of keeping her in the dark for two months after he received her R648,000 from the Road Accident Fund, has now been compensated.

Two weeks ago, Mchunu told Consumer Line that he was not aware that Wheats' money had been settled until she informed him.

He also said he was getting Wheats' file from his tax consultant so he could have the correct amount due to her, and also try to avoid misspelling her name and surname as it had been the case previously.

Mchunu did the honourable thing and kept his promise.

"I'm happy that he did not give me a cheque this time but deposited my money," said a relieved Wheats.

Consumer Line highlighted Wheats' plight recently after she complained that Mchunu Attorneys had not paid her compensation after receiving the money from the RAF.

Wheats, 53, of Westbury, western Johannesburg, said the RAF offered her the settlement in November, and was told she would get the money after six months which she found acceptable.

However, when it was paid out to her attorneys, they did not disclose this until she made an inquiry at the RAF, where she was told that it was paid on July 29.

"When Mchunu wanted a road accident victim he knew where to find me, but when he had to pay me he played hide and seek," Wheats said.

She added that after the RAF confirmed her payment into Mchunu's trust account, she instantly called him to inquire about it and she was given an excuse on why it had not been paid to her.

Wheats said in most cases she would get a response after speaking to Mchunu's driver as the lawyers simply ignored her calls.

Wheats said after her injury in October 2013, she was visited by an agent in hospital who claimed to be working for Mchunu.

She said the agent visited her twice and each time he would miss her as she would have been undergoing X-rays.

The agent eventually traced her to her house after obtaining her details from a hospital file, Wheats said.

"Communication went well until November last year after they received payment from the RAF."

The mother of three said she wants to buy a prosthetic leg for her seven-year-old grandson.

Wheats said her grandson was born with no ankle bone and his left leg was later amputated as he was unable to walk.

She normally raised funds for the prosthetic leg each time it had to be replaced, but felt that she could buy it this time using a portion of her compensation.

Wheats decided to approach Consumer Line for help after Mchunu gave her a cheque with her name and surname incorrectly spelt.

The cheque was post- dated and she only noticed when she tried to cash it when the pay date was due.

"I was turned back and told the cheque could not be cashed as it was not issued in my names," Wheats said.

Soon thereafter it was a hassle to get Mchunu as she claimed he ignored her calls.

But Wheats is now over the moon that she has finally got her money and her grandson will get his new prosthetic leg.