Ah, but our land is beautiful as spring unfurls across country 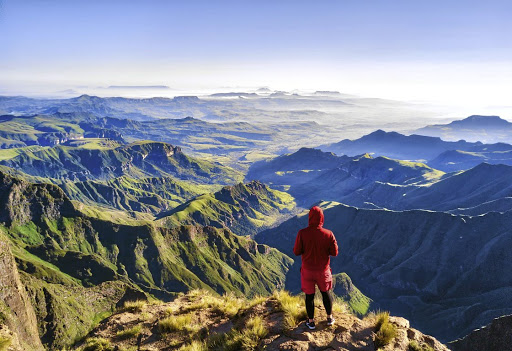 To stand in the amphitheatre of the Drakensberg is to know contentment as the sun and the mountain agree to bless all the people of the land with a share of light and shadow.
Image: 123RF

Every year in spring we are reminded yet again of the beauty of life in this place called SA.

In the hinterland of the Eastern Cape, undulating hills on which sheep and cattle graze leisurely fill the soul of the humblest rural villager with pure joy, the kind even the richest man in the glitzy penthouses of Sandton may never experience.

Once there was a Telkom advert in which an old rural man greeted his mate from the other side of the river in Xhosa: "Molo mhlobo wam (Hello my friend)." Those who know the advert know the meaning of true happiness.

He bent a little as he walked out of his rondavel, and the chickens that surrounded him made the kind of noises that revealed the extent to which their small hearts were warmed by the joy that flowed from the old man's soul.

Good adverts have a way of capturing life as we experience it. Remember the one that used to greet visitors as they drove out of Cape Town international airport: "Welcome to Cape Town, where the cloud covers Table Mountain, and Vodacom covers the rest."

The Western Cape is a place where a meeting between a mountain and the ocean is consummated by an approving sky that drops a grey umbrella as if to ensure that both the ocean and the mountain don't sweat when they enjoy each other's company.

The people of Gugulethu and Camps Bay have parties to celebrate what nature chose to do in their part of our country.

Those of KwaZulu-Natal, too, have not been blessed less. Their hearts are soothed by the generous shadow of the Drakensberg. They overflow with contentment each time the sun and the mountain agree to bless Zulus, Indians and whites with a simultaneous share of light and shadow. Even the beachfronts of that province look and feel as though they were designed to make human life more pleasurable.

South Africans fear future as state has lost its legitimacy

The expansive plains and reluctant mountains of the Free State have a uniquely relaxed posture. Maybe that is why life is unhurriedly welcoming in that calm province.

Geographically, the Free State is in SA exactly where the heart is positioned in the body. To be in the quiet big city of Bloemfontein or the sleepy dorpie of Deneysville is to know what it means not to worry.

The expressive bareness of the Northern Cape seems to suggest an element of purposeful design. From the second-half of the 19th century, with the first inflow of fortune-seekers to today, Kimberley has always been an exuberant place. Life in the Northern Cape is lived as if there is no tomorrow. Even grinding poverty in places like Kuruman cannot hold back the hedonistic tide.

In the small town of Taung - or in Mahikeng itself - people live as if they always intend to boast that they belong to a platinum province, the North West. When the weekend comes, the poor there ignore all their troubles and have fun.

The bond between Limpopo and Mpumalanga is cemented eternally by the great Kruger National Park. Who in the world does not wish to visit that famous park?

Nature has conspired to make the people of those two provinces happier and healthier. The soil in Venda is as rich as that of Hazyview or Tzaneen. It bountiful. People don't buy fruits there. They live as if Adam and Eve are their Garden of Eden neighbours.

If you wish to experience the fullest meaning of the word "pride", go to Gauteng. A person in a shack or mansion there feels proud even in their sleep. Smallest though it is, the province is the richest in SA. Those who come from Gauteng always walk with a swagger. Life is good there.

It is true that we have crime and other problems in SA, but even the racists who left in 1994 know that Canada's dreariness or Australia's sleepiness is nowhere close to a typical summer day when we braai in different parts of our beloved country.