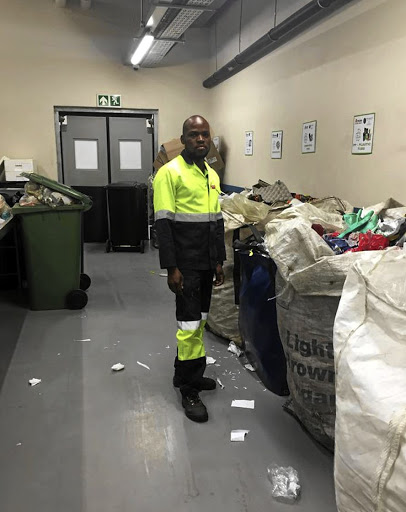 After disposing and recycling waste materials from Sheraton Hotel for a year, Phala Serotobale says he remains unpaid for the service provided.

Serotobale, 34, of Pretoria East, accused Sheraton Hotel of exploiting his services services for nine months and later terminated his service without ever paying him, he said.

The father of two said he started the recycling business in 2012 when he saw an opportunity to turn waste into investment.

The budding entrepreneur said he worked as a security guard when the idea was planted in his brain.

Serotobale said his other wish was to educate his siblings as his parents could not afford to take them to any decent schools or university. His unemployed mother lives in Limpopo, while his late father was a petrol attendant.

Through his recycling business, Serotobale was able to take his three siblings to school - two of whom went as far as matric, while the last born obtained a degree in computer engineering and now works for Ford Motors.

Serotobale said he later thought of approaching institutions' like hotels and factories which are bound to produce waste which they would later want to dispose off.

In September, he approached Brett Winter who is a health and security manager at Sheraton Hotel and made a proposal to collect their waste at a fee, he said.

Serotobale said around October, he then started rendering the service of classifying recyclable waste for free to the hotel, with the agreement that Serotobale should pay Sheraton for the tonnage collected.

'Social grants are not for loan repayments'

However, a month later Winter requested him to collect all general waste and the agreement was that he would be paid per quote, he said.

Serotobale was required to submit a quotation which was R3,333 per week as one bin was quoted at R193, he told Consumer Line.

"From November to date, I was never paid for my services and all subsequent inquiries on why I have not been paid as agreed resulted in my services being terminated in June without ever receiving a payment," Serotobale said.

He said the hotel owed him R88,233 so far. Serotobale said the hotel had ignored a letter of demand from his attorney and he could not issue summons as he did not have money to pay for his legal cost.

"I think they exploited my services and now want to frustrate me as they know I do not have money to fight this in courts," he said.

Pascal Fouquet, a general manager at Sheraton Hotel, said he met Serotobale and gave him a few options and was waiting to hear from him.

"We are certainly happy to work with Mr Phala to resolve this," Fouquet said

However, Serotobale said the hotel offered to pay only R20,000 in instalments of R3,000 per month, which he rejected.

Fouquet has not explained why the hotel was only willing to pay him R20,000 at the time of going to print.

He only thanked Consumer Line for providing him with the initial quote Serotobale submitted to them last year.

"Thanks for your e-mail and Mr Phala should contact me that we can close this," Fouquet said.