'Nearly-men' Pirates lost title due to a lack of conviction 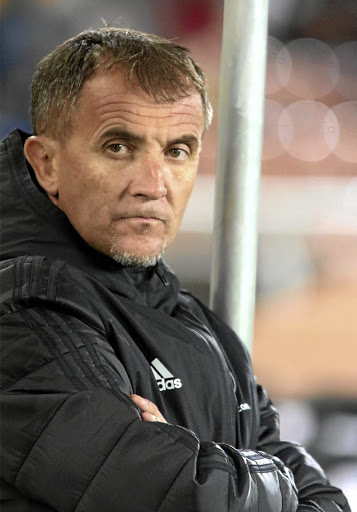 Orlando Pirates' rapidly growing reputation as the Premier Soccer League's "nearly-men" can't have been helped by yet another capitulation in the title race.

Just to put things into perspective: Pirates have now gone five straight seasons without silverware and, in this period, they have come close to trophies, filing past them as they entered the field, only to watch in desolation as opponents celebrated, while they had to settle for second place.

It was the case again this past weekend, as they observed in agony when Mamelodi Sundowns sealed the deal against Free State Stars to annex a second successive Absa Premiership title, while the Buccaneers were again reduced to runners-up despite appearing a shoo-in for the title just a few weeks ago.

The weekend's failure to seal the deal was all too familiar for Pirates fans who saw their team enter the Telkom Knockout as favourites back in December, only to lose to lowly Baroka on penalties. Nedbank Cup finals had also similarly been lost to SuperSport United in 2016 and 2017.

So just what paralyses Pirates when it's crunch time?

The past two seasons illustrated a shocking lack of conviction when it came to Pirates' ambitions.

Orlando Pirates coach Milutin Sredojevic has a strong belief that finishing as runners-up for two seasons in a row has laid a solid foundation for ...
Sport
2 years ago

As pointed out by Downs coach Pitso Mosimane last year, no one at Bucs even dared say they wanted the league title. From coach Milutin Sredojevic to captain Happy Jele and other senior players, talking up Bucs as title challengers seemed taboo.

"We are totally focused on ourselves, not what's ahead of us," coach Micho would sheepishly say towards the end of last season.

He has not been any different this season, even when Bucs were flying high, while Sundowns were preoccupied with continental football.

An article we published on April 15, two days after Bucs had established a six-point lead at the top, albeit with more matches played, quoted the Pirates coach as saying: "We want for the second consecutive time to bring Pirates back to the Champions League. Whatever else comes, we shall see."

This is hardly inspiring stuff. Instead, Micho seemed content with second place - which you require to qualify for the Champions League.

Micho is no Pitso. Instead, he is a measured, diplomatic and highly respectful person who would never resort to insult even under extreme provocation, and for that he has to be commended. But in certain circumstances, he has to exude the image of a man totally in charge, a coach full of confidence and belief. Saying "yes we are on top and we want to stay there" surely won't cause any harm.

Titles, of course, are won on the pitch - not in press briefings. Ultimately Pirates' draw at Cape Town City - coupled with Sundowns' own resilience in the final stretch - was responsible for their failure this time.

But did the players really believe they could win the title even when they were six points ahead? Did anyone try and unsettle the opposition with witty pyschological warfare as they played catch-up amid the most hectic of schedules?

Well, it appears everyone there just assumed a defeatist posture of "nearly-men", bridesmaids who are always there, but are never the bride.

It can't be a championship-winning trait.