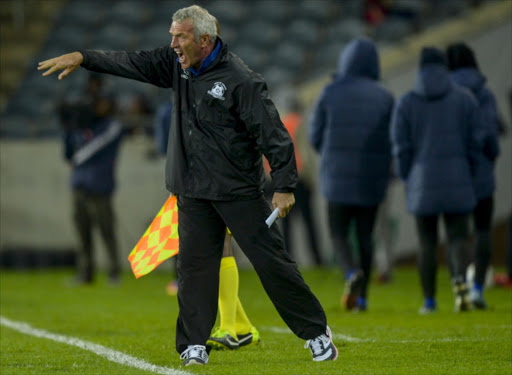 It was a relief to hear Ernst Middendorp say he's "wiser" now than when he landed at Kaizer Chiefs in the winter of 2005.

Then, he arrived in the country to assume the helm at a team who had just retained the league championship in a dramatic come-from-behind fashion, won a cup and arguably had the most complete squad of the time.

But soon thereafter, Chiefs were unrecognisable from the side who had overhauled Orlando Pirates' massive points gap at the top to win the league on the last day, Middendorp having turned them into a pedestrian team who struggled to get results.

His irritability was noticeable with every press briefing, and most of his players dreaded a mistake on the pitch as it would be followed by animated gesticulation and, at times, expletives. Even TV producers had to be alert as the German could throw in a swear word or two in post-match interviews (he once used "sh!t" in a flash interview).

Some of us who dealt with him directly dreaded calling him. But from my experience, this is where he was actually very good. He always answered his phone. He would pick up, give me an earful about something I had written which had made him unhappy, and still grant the interview.

Of course 2005-2007, when he was first at Naturena, was the era before today's practice of coaches needing "permission" from overzealous fans masquerading as media officers to speak freely to journalists.

New Kaizer Chiefs coach Ernst Middendorp aims to do things differently to his first stint at the club.
Sport
3 years ago

There's no doubt that he's grown a bit now, helped in the main by several stints at Maritzburg United, Free State Stars and Bloemfontein Celtic - the clubs he coached after Chiefs sacked him in March 2007.

The Chiefs he's inheriting now is also vastly different to the one he found in 2005. This one has not celebrated a trophy since 2015, is in decline and has been dumped down by a management who seemingly refused to read the signs and acclimatise for the past three years.

Middendorp re-employment is a sign of desperation, given his previous spell at Naturena. But there's little doubt he's a massive improvement from Giovanni Solinas, who sounded more and more ridiculous with his statements that you wondered what he actually said to trick the Motaungs into hiring him.

Middendorp will surely improve Chiefs - anyone after the disaster that was Solinas would - and make them more competitive, the same manner he did Maritzburg and Celtic during his spells there. The danger, however, is that Chiefs are not in the same category as the latter two clubs.

Despite the rapid decline, they yearn for a return to the gigantic status that Middendorp found them in, when under Ted Dumitru they had won back-to-back league titles. They have not reached a cup final since 2015. They have lost all Soweto Derbies this year. They had a charlatan as head coach for the past four months.

Can Middendorp dig Amakhosi out of their rut? Only time will tell. What is clear now is that while he may be wiser, the team is in a far worse state.