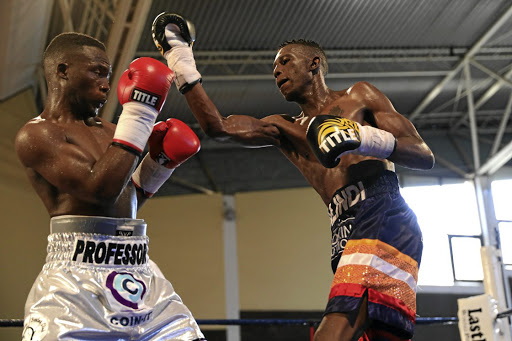 Makazole Tete was defenceless against Ronald Malindi at the Orient Theatre in East London. Malindi will top the bill at the wards night, bidding for first defence of his bantamweight belt.
Image: ALAN EASON

In an unprecedented pursuit to ensure that boxing owns the night on Friday evening, Boxing SA chief executive Tsholofelo Lejaka announced yesterday that together with the Gauteng Promoters Association they have included a tournament that will pave way for the awards.

The well-attended announcement took place at Sandon City Hotel, where Lejaka said the four-fight card will comprise three titles; two SA male and female, as well as a four-rounder.

These fights will take place at Sandton Convention Hall, which is the venue for awards.

Topping the bill will be Ronald Malindi bidding for the first defence of his bantamweight belt against Cleutus Mbele. Ndobayini Kolosa's lightweight female belt will be on the line against Xolisa Jonas.

Busakwe Khaya and Brandon Naude will meet for the vacant Gauteng male lightweight belt with a four-rounder as the undercard.

Moment of truth for SA boxing

Malindi will face the man he defeated on points in a nontitle fight in 2016 while Kolosa won the belt in 2017. The scarcity of contenders has made it impossible for her to defend.

Malindi is nominated for the Boxer of the Year award while Kolosa's nail-biting nontitle fight with Hedda Wolmarans, which took place at Turffontein Racecourse in March, is also shortlisted for female fight of the year.

The fighters that will be involved in title fights on Friday met yesterday during their pre-fight medical which was conducted by Dr Solly Skosana. Action will begin with the first six awards and then action in the ring will begin later with the rest of the awards sealing the night.