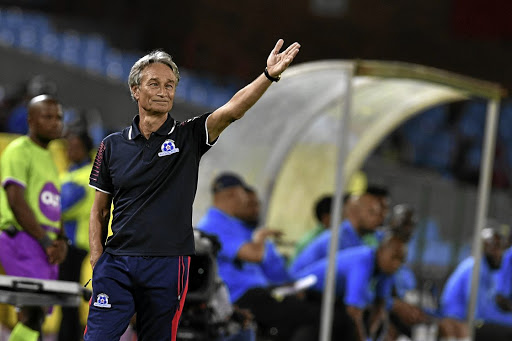 Ertugral joined bottom side Maritzburg last month but the team never got going under his regime, slumping to four straight Absa Premiership defeats and an embarrassing first-round elimination from the Nedbank Cup at the hands of lower-league side Witbank Spurs.

A tenure that had started with fanfare when Ertugral took over the hot seat alongside Mabhuti Khenyeza, who retired as an AmaZulu player to join the Team of Choice as assistant coach, was clearly bound to flounder.

The strangest coaching combination in the domestic league began the year with a loss to Golden Arrows in the KwaZulu-Natal derby, following that up by losing a six-pointer at home to Free State Stars.

While the Maritzburg board opted to keep Ertugral on despite subsequent defeats to Mamelodi Sundowns and Chippa United, it's clear Sunday's shock loss to NFD club Spurs - coached by former Bafana Bafana mentor Shakes Mashaba - was considered a nadir in the club's troubled season.

"The coach admitted that he was concerned himself and felt he had done everything as best he could to turn things around, but the results did not come," said Maritzburg owner Farook Kadodia in a statement.

"It was then decided that we both shake hands and, by mutual agreement, go our separate ways. Normally a new coach brings a new energy into a club and we had high hopes that this will be the case when we appointed Muhsin Ertugral. Unfortunately after five games this was not forthcoming."

The Team of Choice next visit high-riding Bidvest Wits on Friday.