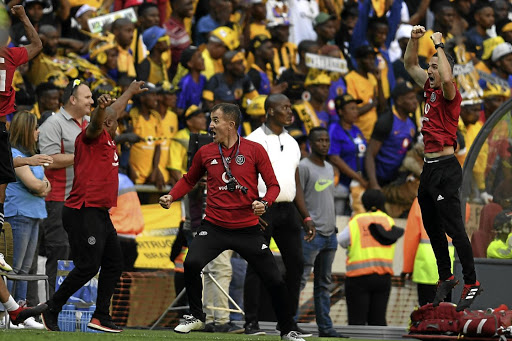 As Orlando Pirates make a return to continental football for the first time in three years tomorrow, their fans would be hoping it doesn't disrupt what seems to be a puzzle coming into place at the club.

High-riding Pirates are fresh from disposing of Kaizer Chiefs yet again to qualify for the Telkom Knockout final, having enjoyed thorough rehabilitation under Milutin Sredojevic after their previous success in continental football - when they reached two finals in 2013 and 2015 - plunged them into an abyss.

The Buccaneers are now top of the Absa Premiership, having finished as runners-up last season and, as they take on Light Stars of the Seychelles in the CAF Champions League preliminary round (Orlando Stadium, 7.30pm), they will hope to sustain what has looked a promising start.

"A lot has changed in the past three years since [we] were last in the continental competitions," admitted Pirates administrator Floyd Mbele yesterday. "We have worked hard to be back in, but we have noticed that some teams have become stronger, so we can't take anyone lightly."

Mbele was there when Pirates reached the Champions League final in 2013, which they lost to Al-Ahly. Bucs were also pipped to the Confederation Cup final by Etoile of Tunisia in 2015.

Orlando Pirates coach Milutin Sredojevic says planning for the demolition of Kaizer Chiefs started immediately after they were drawn against their ...
Sport
3 years ago

What followed after that was a barren run which culminated in Pirates plunging to a shocking 11th place finish in 2016/17, having gone through as many as five coaches before Sredojevic arrived to steer the ship to calmer waters last year.

"We have learnt our lessons," Mbele said. "We felt those effects of reaching two finals. In 2013 we played 53 matches, something which was unprecedented. We now have to look at how to manage the team and keep it focused on the domestic league as well as the Champions League.

"We have to systematically keep it fresh, from conditioning to nutrition."

Pirates begin a schedule from hell tomorrow as they have to play seven matches in 25 days - something which Mamelodi Sundowns became accustomed to in the past two years.

"We have to deal with the schedule," Mbele said. "We have to go to Seychelles before playing Baroka in the final [on December 8] and the fact that Seychelles is a preferred holiday destination at this time of the year might not work to our favour. But we must deal with what's ahead of us."