It's a week of 'must-win' matches for Sundowns coach Mosimane 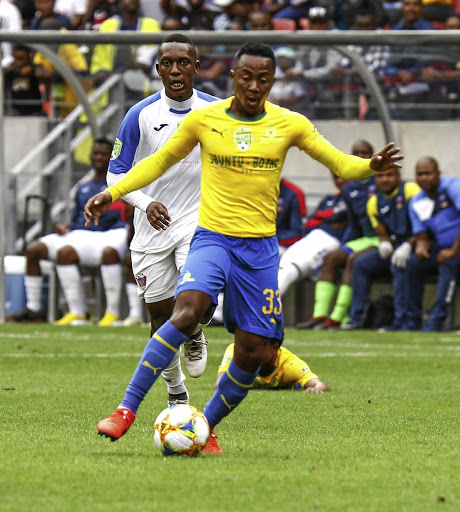 Lebohang Maboe came off the bench against Chippa but should return to Sundowns' starting XI tonight. / Michael Sheehan/ Gallo Images

Faced with what he terms a week of "must-wins", Pitso Mosimane should revert to his strongest line-up as Mamelodi Sundowns seek to move closer to the Absa Premiership summit when they host AmaZulu this evening (Loftus Versfeld, 7.30pm).

Mosimane made a host of changes in Sundowns' cup defeat to Chippa United at the weekend, banishing the likes of Hlompho Kekana and Lebohang Maboe to the bench, while Ricardo Nascimento and Thapelo Morena did not even appear on the team sheet.

Tiyani Mabunda is another player who was absent against Chippa, albeit Mosimane put injury as the reason, but all the seniors should return to the first XI for tonight's crucial match, and Friday's CAF Champions League Group A fixture against Asec Mimosa, of Ivory Coast.

"Tuesday (against AmaZulu) is a must-win; Friday against Asec is a must-win," Mosimane said following the 1-2 loss in Port Elizabeth against Chippa.

"We have games in hand that we must finish. It's tough, but we have to accept [the pressure]."

Mamelodi Sundowns was eliminated from the Nedbank Cup but coach Pitso Mosimane took positives out of the 2-1 loss to Chippa United.
Sport
3 years ago

A win for Sundowns could see them topple Wits off the top spot, with two more matches in hand. It's a scenario that would best please Mosimane in a season which began with him doubting his team's championship credentials after they lost Percy Tau and Khama Billiat.

As he had warned in his pre-match briefing, Mosimane seemed to have sacrificed the cup in pursuit of Premiership retention and another go in the Champions League.

"The Nedbank Cup is taxing. It can lead you to the semifinals. If we had Mabunda and Kekana, we would be different. But you have to look after the players as well. You can't afford not to rest them. We had to rest Lebo (Maboe) because he has been playing all the games. If you play Kekana and he pulls a hamstring, then you're left with nothing, with Mabunda also injured."

But AmaZulu, who themselves were bundled out of the Cup by Highlands Park, will be buoyed by the fact that they won at Loftus last season.

They will also be hoping to hold the Brazilians for a longer period, knowing they might be distracted by Friday's clash against Asec, which Mosimane said would assume the same level of importance he gave Wydad Casablanca two weeks ago.

Tonight's match, meanwhile, will not be broadcast as authorities, apparently, want to give more focus to the Cup matches taking place this evening.