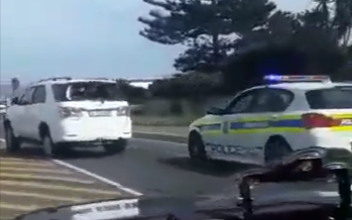 The SUV tries to evade police during the chase.
Image: Screengrab

Three men who allegedly hijacked a woman at gunpoint were arrested after taking police on a high-speed car chase and dodging bullets in Cape Town.

Police received information that a woman was robbed at gunpoint in Zeekoe Road, Grassy Park, on Thursday morning by three men who forced her out of her vehicle.

“The vehicle's tracker was activated and a high-speed chase followed when members of the Flying Squad spotted the vehicle,” said Swartbooi.

Swartbooi said the driver of the SUV ignored calls to stop and the vehicle bumped into several other vehicles during the high-speed chase.

Video footage of the chase showed the SUV speeding through the suburb of Ottery while trying to evade the police.

Despite the police firing on the vehicle, the driver continued his bid to escape from the law.

The SUV was eventually brought to a halt in Ottery next to the Ottery Shopping Centre.

Swartbooi said they were found in possession of an imitation firearm.

“Once charged they are expected to make a court appearance in the Wynberg magistrate's court on a charge of hijacking,” said Swartbooi.

Another victim has become the latest statistic in a surge of hijackings that have plagued several townships in Gauteng.
News
10 months ago

Terror of criminals posing as police

Police in Mpumalanga are seeing a rise in criminal cases involving people posing as members of the force.
News
11 months ago
Next Article