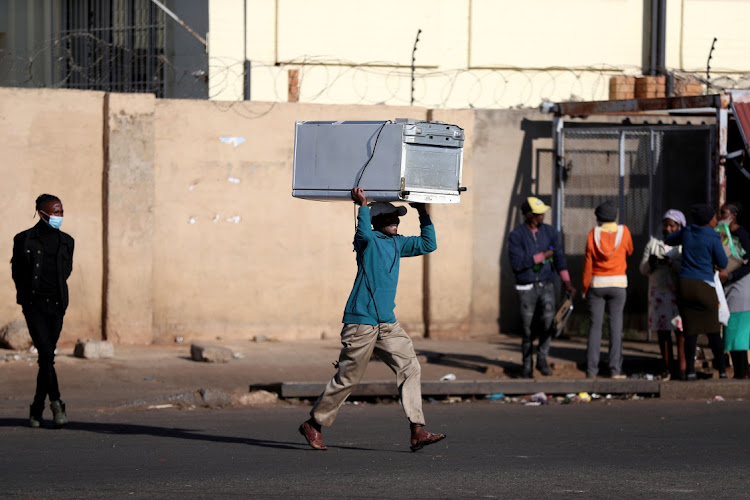 A man runs after looting a shopping centre in Katlehong. A neighbourhood watch team, made up of a few male patrollers and about a dozen grandmothers, kept close eyes on the streets in Bertrams during recent violence and looting in Johannesburg.
Image: REUTERS/Siphiwe Sibeko

While looters ran through the streets of Johannesburg, grandmother Evelyne turned off her lights, stood by her window and carefully lifted her curtain, surveying the chaos when gunshots and screams filled the night air.

The 72-year-old was guarding her property, but she was also gathering information to share with her neighbourhood watch team, made up of a few male patrollers and about a dozen grandmothers in the inner-city’s Bertrams neighbourhood.

“I was scared to go outside but I heard gunshots coming from a nearby shop and groups of men running through the streets,” said Evelyne, who relayed her observations to her team who then alerted police.

“One man tried to jump over my wall but I shouted through the window and he ran away,” Evelyne, whose full name is being withheld to protect her identity, told the Thomson Reuters Foundation.

SA’s worst violence in years broke out after last week’s arrest of former president Jacob Zuma, with soldiers deployed to stop crowds looting everything from washing machines to fridges and groceries.

The unrest comes at a time of frustration with Covid-19 restrictions, government corruption scandals and inequality that persists 27 years after the end of white minority rule

The unrest comes at a time of frustration with Covid-19 restrictions, government corruption scandals and inequality that persists 27 years after the end of white minority rule, with unemployment hitting a new high of 32.6% this year.

One of the most unequal countries in the world, SA saw its highest murder rate in a decade in 2020, with 21,000 homicides, or 58 a day, a figure five times higher than the global average, according to government statistics.

Residents say rising unemployment fuels drug use and crime while more than a year of Covid-19 lockdowns have triggered major job losses in many sectors.

The grandmother lookout team, who generally patrol from the safety of their patios, have become more valuable than ever, said Thomas Makama, founder of the neighbourhood watch scheme.

“At least two shops were looted, but we managed to stop up to 10 shops from being attacked because we were on the lookout and called police for urgent backup,” said Makama, who called and visited the grandmothers to gather information.

Gauteng premier David Makhura is calling for peace and calm following a deadly stampede which claimed the lives of 10 people at the Ndofaya Mall in ...
News
4 months ago

“It’s dangerous work,” said 61-year-old Makama, who never carries a weapon and relies on his people skills to engage with criminals and police and dissipate danger.

Makama founded the Bertrams Residents Movement in 2015 after the community helped him get back his home when he was evicted and forced on to the streets by “hijackers” who were trying to illegally take over the site where he lived.

Makama, who was working as a panel beater and unable to afford rent for his family of six, had been given permission to build a shack on the land by its owners, who lived in Canada.

“The community realised what had happened and protested my eviction. We got legal support and eventually returned,” said Makama, sitting alongside his corrugated iron shelter.

“The community saved my life, so now I dedicate mine to them.”

Makama patrols the streets on foot at night to make sure residents are safe. The grandmothers act as extra eyes, quickly phoning Makama if they hear or witness crime.

Residents said Makama comes quickly at any hour to calm people while they wait for police to arrive.

It takes two to fight crime. We need the community involved because they are there 24-hours and know what is happening in their environment

“It takes two to fight crime. We need the community involved because they are there 24-hours and know what is happening in their environment,” said Bertrams police captain Richard Munyai, cautioning residents not to approach criminals.

“They must not be heroes, just informers.”

Criminologist Anine Kriegler said the grandmothers sitting on their porches and looking out their windows are using a tried-and-tested method known as natural surveillance, which deters criminals by increasing the number of eyes on them.

“Grandmothers have been playing an important role in looking after young people for most of human history,” said Kriegler of the University of Cape Town.

Such surveillance tools, which also include keeping entrances well-lit and cutting down bushes to eliminate hiding spots, offer a low-cost alternative to barricading yourself behind high walls and electric fences, she said.

“The wealthy buy themselves fortification that harms natural surveillance,” she said.

“We can’t look out for each other if we live in fortresses.”

As traumatised South Africans hunker down during the third wave of Covid-19 while looting and destruction continue, one person who has chosen not to ...
News
4 months ago

Though many South Africans have lost faith in the police, with some even resorting to vigilantism, communities can work together to improve their security through neighbourhood watches, she said.

Makama is a firm believer in non-violent crime prevention, citing how one grandmother called him to stop a drug dealer beating his daughter. The police rushed to the scene and arrested the man, who remains in prison.

“There are a lot of problems but we do something to protect one another instead of waiting for things to get better,” said Evelyne.

The group, made up of just 18 regular volunteers, also helps the community respond to illegal evictions, contacts government over water or electricity cuts, escorts children safely to school and runs a soup kitchen.

“We play an important role. We do it for free because we care,” said Elizabeth, a 60-year-old volunteer.

Uncertain whether looting would continue when darkness fell, Makama prepared for another sleepless night, determined to give back to neighbours who helped him over the years.

He described how he nearly cried at Christmas when he was short of food and Evelyne delivered a trolley filled with groceries to his door.