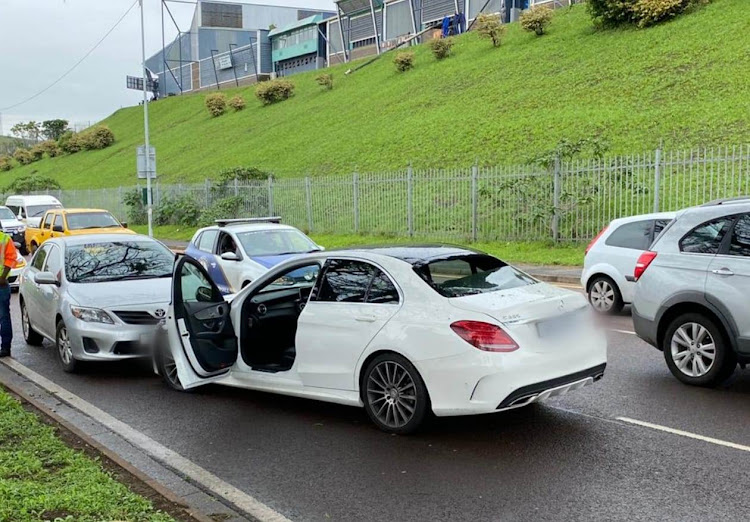 Armed men crashed the Mercedes-Benz they had allegedly hijacked in Durban on Thursday morning before firing shots at police and security officers.
Image: supplied

The scene that played out on North Coast Road in Durban on Wednesday could have easily been mistaken for an action movie, with a gunfight between alleged hijackers and security officers and another vehicle hijacked for the suspects to escape.

Marshall Security said it received multiple calls for assistance in a hijacking in Northway, Durban North, at 10.30am.

"A woman’s white Mercedes-Benz was hijacked by three armed suspects and they fled in the direction of North Coast Road. Members of our special operations team and our armed reaction officers, as well as metro police, were immediately mobilised, and the vehicle was seen on North Coast Road," the private security company said.

A gang of suspects, allegedly clad in Fidelity jackets, hijacked and robbed a cash-in-transit van in Randburg on Monday afternoon, police said.
News
1 year ago

The suspects crashed the Mercedes and proceeded to fire shots at the officers, who returned fire.

"The suspects fled on foot. After a short chase, metro police apprehended one suspect and Marshall Security apprehended the other.

"The third suspect hijacked another vehicle and managed to evade capture. This vehicle is fitted with a tracking device and our special operations team are in the process of recovering it," said Marshall Security.

A firearm and the Mercedes-Benz were recovered.

"The scene is being secured and the suspects have been taken into custody for investigation and processing."