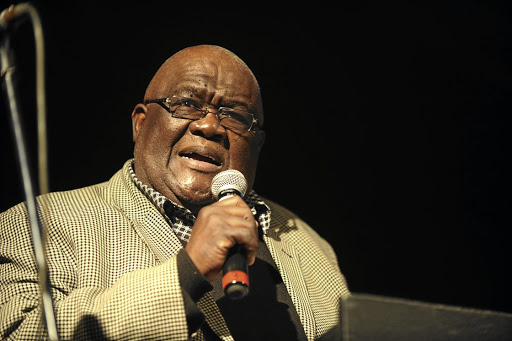 Actor and arts activist Mabutho 'Kid' Sithole feels indigenous languages are an inheritance from our forbears and that they must be treasured and kept alive by passing them on to the next generations. / Tsheko Kabasia

Imagine walking into a board meeting of a multibillion-rand company, greeting everyone in Tsonga and also getting to conduct proceedings in the same language.

This is the dream legendary actor Kid Sithole has for indigenous languages in SA and wants to live to see come true.

Sithole told Sowetan indigenous languages were a gift passed from one generation to the next and should be treasured.

"We have watched our language and history being dumped in the dust bin. We can't fold our arms anymore. We must fight this. Our languages are an inheritance from our forefathers which we must treasure and pass to the next generation," he said.

Sithole said most of the youth and even adults did not know their clan names and praises as the more educated people became, the more they disregarded their culture.

"If we lose these cultural values of clan names, we will become empty shells," Sithole said.

He admitted that the decline in the use of indigenous was taking place even in his own family.

"I recently spoke to my daughter about this. I told her that I cannot speak English with my own grandchildren. Our languages are an inheritance for us. We cannot lose this inheritance," he said.

The issue of preserving and promoting indigenous languages has been a challenge for government and civil society for some time.

We have entered into a new school year on our calendar with a lot of scars and bruises on our public education system.
Opinion
1 year ago

English has continued to be the most preferred language.

Furthermore, as big cities such as Johannesburg continued to attract people from different cultures, English became the preferred language of communication.

Zilibele Mtumane, head of the school of languages at the University of Johannesburg, said the perception that English is a better language had to be stopped.

"We want to correct that perception that there is a language that is more important that another.

"When you speak Xhosa, that is how we identify you as umXhosa. The same with other languages. If these languages get extinct, that means that in the long run, we might not have people called amaXhosa or amaZulu," Mtumane said.

Varsities urged to play their role.
News
1 year ago

South African public schools do not have enough learning and teaching support materials in African languages.
News
1 year ago

The department of basic education plans to include Nama (Khoekhoe) language as one of the incremental introduction of African languages (IIAL) ...
News
1 year ago
Next Article