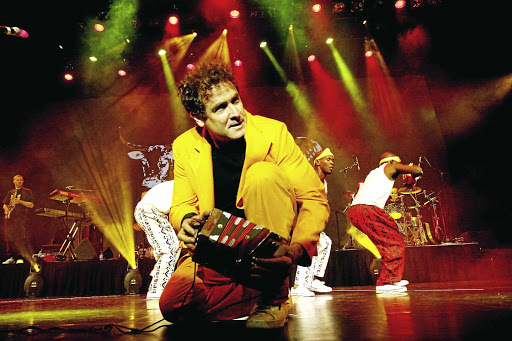 Johnny Clegg was not one for a flashy wardrobe when he performed in front of hundreds on local and international stages.
Image: Cobus Bodenstein

Aged 66, the decorated Clegg had only recently retired from touring. With the whole country and the world still reeling from the news, Clegg was quietly buried on Wednesday in a private family ceremony.

The haste of his burial robbed politicians and the usual professional mourners of the opportunity to strut their stuff before the cameras.

Clegg's family avoided the spectacle of hosting thousands of people jostling to be seen in the right circles at what is supposed to be a sombre occasion.

The funeral service would have meant screen time for the mourners. Alas, Clegg and his family had other ideas.

Funerals are big social events in this country. It is an occasion to showcase the latest fashion and bling wheels.

When he performed locally and abroad, Clegg chose a simple T-shirt, a pair of jeans and takkies as his on-stage wardrobe. I guess it would have been uncomfortable to perform the famed Zulu dance, indlamu, with any other footwear.

However, most people wouldn't be seen dead at a funeral, excuse the pun, with the same outfit they'd worn to another funeral.

Whereas the deceased could not be bothered with the label of your suit, the living have deemed it fit to wear only the best.

In a week that South Africans collectively bid farewell to cultural icon Johnny Clegg, a choir has, in a similar manner to what the incomparable ...
Entertainment
3 years ago

These exorbitant funeral rites have also brought pressure on the families of the bereaved to break the bank to cater for the mourners.

It is customary to rush back to the home of the deceased for a plate of food, preferably with a colour-film menu of assorted vegetables and meat. Anything less will be frowned upon.

In fact, if word got out that there was no beast slaughtered at your funeral, the number of mourners would dip exponentially.

I have discovered that the only winners at a black funeral are the family dogs, which will be spoiled for choice for leftovers, and the slay queens who will likely score with a big spender to cater for their weekend entertainment.

After they've gorged themselves on the food, the mourners will make a bee-line to the liquor store to host their 'after tears'.

Although Johnny Clegg had imbibed and internalised Zulu culture, his final journey was freed of the excesses of bankrupting township culture. The only people I know who bury their dead within 24 hours are the Muslims.

With my black people, it can take anything from a week to two weeks while we wait for the arrival of a broke uncle whose whereabouts have defied even Khumbulekhaya.

We may have been battling to put food on the table, but will pull out all the stops to feed the multitudes when we have a funeral.

Perhaps the time has come to re-look the societal pressures of hosting expensive burials. If a decorated French knight like Clegg can get away with it, Vusi should not break the bank to impress fake mourners with expensive booze and dessert at such a solemn occasion.