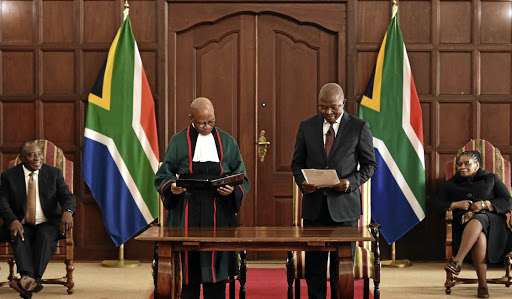 David Mabuza is sworn in by chief justice Mogoeng Mogoeng this week as President Cyril Ramaphosa and speaker of the National Assembly Thandi Modise look on.
Image: Jairus Mmutle/GCIS

One of my big mistakes this week was to watch the announcement of the new cabinet in a state of sobriety.

I joined millions of South Africans who waited for President Cyril Ramaphosa to name his ministers and their deputies.

The president had promised a New Dawn and a leaner cabinet but cometh the hour, it felt like old wines in new casks. His so-called reconfigured cabinet stood out for me in what was missing.

I am not blowing my trumpet when I posit that I am eminently qualified to head such a ministry.

The masses of our people are in dire need of a department that will give them a reason to believe.

I was driven to drinking on Wednesday night as Ramaphosa rearranged the deck and increased the number of deputy ministers. Perhaps that's what he had in mind when he formed the new ministry of employment and labour. Ramaphosa the businessman knows from experience that jobs are not created by the government but Ramaphosa the politician decided to pull the wool over our eyes.

Had he chosen to appoint me as minister of happiness, I would have ensured all the slay queens are immediately employed in my department.

This would kill two birds with one stone as the harmful phenomenon of blessers would be suffocated.

I would ensure that the bubbly flows in every village, town, suburb and ward.

I would rope in the private sector to sponsor my events to spread the love and increase the country's happiness index.

Instead of our people ogling the good life of reality TV stars on Moja Love channel, the entertainment would come to their doorstep.

Instead of our people being chased down township streets by TV cameras for having a nyatsi, no one would bet an eyelid if you had a side chick. It is downright hypocritical to insist on monogamy when there are so many fishes in the sea. It is inhuman to chain human beings to one partner for life.

President should have power to jinx unemployment.
Lifestyle
3 years ago

After all, it is said that variety is the spice of life.

If people were allowed to cheat within the parameters of the law, it would deal a blow to gender-based violence. Our country has had enough of men killing their partners for alleged cheating. Any spouse walking in on their partners in the embrace of a lover would apologise and allow the couple on the bed to wrap up their nookie without any drama.

I would also outlaw the terrible habit of policing your partner's smartphone.

No wife would be allowed to prick their ears when their husband's phone rings. When your woman's phone rings, you will be obliged to exit the room and afford them the necessary privacy.

Trying to hack your partner's phone password and pattern would be deemed a crime against hormonal integrity. Any man and woman would be free to jol without fear or favour.

I know that President Ramaphosa's Sunday is not complete without reading this column, so I would like him to reconsider a proper reconfigured cabinet by giving me a call at his earliest convenience.

My slay queens are waiting to pop the champagne. Thuma Mina!