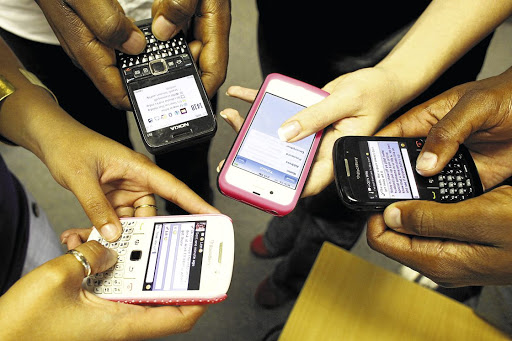 The social media blackout on Wednesday gave mobile phones a brief respite from the relentless texting and picture-sharing. It also allowed families to really see and talk to each other.
Image: Alan Eason

One of the modern inventions I have no use for is the WhatsApp voice note.

You can call me old-fashioned but I prefer the written word, which I believe carries more punch than the emojis and memes favoured by the younger generation to communicate.

I also dread the acronyms that have become popular as a form of shorthand communication by those who are too lazy to pen the full word.

I am referring here to LOL, SMH, BRB and IMO - although I cannot help coming across them in my daily interactions. You have to be living in a cave not to know the meanings of the above and you should resign yourself to being a true BBT (Born Before Technology) neanderthal.

The power of social media as a form of communication came under scrutiny when popular platforms Facebook, WhatsApp, Instagram and Messenger went load-shedding on Wednesday.

More than a billion people rely and are dependent on social media across the globe.

It felt like the end of the world for millions when they suddenly could not see pictures on their timelines and access their messages.

The voice notes were also not going through, leading to outrage and frustration.

Slay queens and nyatsis were particularly hard hit, since they could not confirm their bookings for the Durban July with their sugar daddies. The blackout greatly reduced the traffic of nude pictures and millions of meaningless videos shared on a daily basis.

In my case, I earned a brief respite from a security-obsessed neighbour who endlessly posts about "suspicious vehicles" in our neighbourhood.

The lady, who clearly has a lot of spare time, is always on the prowl to alert us about any "dodgy-looking" people or vehicles.

Nightmare of Mzansi's reality makes it hard to share dream

She must have read a lot of Agatha Christie novels or is a fan of Alexander McCall Smith, who in a series of novels introduced Botswana's detective Mma Precious Ramotswe.

While we should all be on the lookout for potential criminality in our neighbourhoods, clearly someone has taken the role too far. I guess we can't blame her since ours is a country in the grip of rampant criminality - but most of her postings are false alarms.

I digress, though. The social media outage led to some positives. Family members living under one roof, who had not shared a table during meal times as they are glued to their smartphones, suddenly discovered the bond of human contact.

Spouses who had neglected their matrimonial duties reportedly rediscovered their libido and I wait with bated breath for the results in nine months' time.

A corporate-climbing mother, who had not seen her technophile son in months, was shocked to see a bearded man come down the stairs for supper, only to discover it's her son.

The use of social media is so pervasive that some families communicate on WhatsApp even while under the same roof.

The social media blackout was resolved the following day, which flooded my inbox with tantalising requests to sponsor an orgy-fuelled sojourn to the Durban July.

I was momentarily tempted to hit the coast, but I just blue-ticked the senders. Andizi!