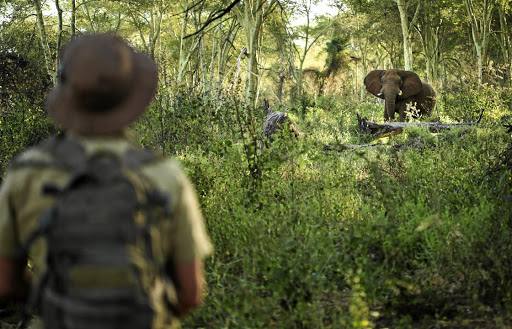 Elephants have also borne the brunt of poachers who kill them for their tusks. At the beginning of April, elephants at KNP decided to take the law into their own paws.
Image: MARIANNE SCHWANKHART

Everybody loves an underdog. It goes back to the day David stretched his slingshot and hit Goliath with a stone on the forehead.

It gives us a fuzzy feeling when an unheralded challenger overcomes the odds and triumphs. This becomes even more pronounced when the hunter becomes the hunted, or the victim turns the table against the aggressor.

SA embraced the Lion Mama from Eastern Cape when a neighbour alerted her to the gang-rape of her daughter. The brave woman did not think twice when she grabbed a knife to confront the rapists. She caught them red-handed and slashed one of them to death.

While vigilantism is to be frowned at, the rate of violent crime in South Africa has hardened our hearts. The police are overwhelmed and suspects often escape with murder, literally.

The situation has gotten so bad that even animals have started fighting back. As the whole world knows, the rhinoceros is facing extinction as a result of poaching. This country is home to 80% of the world's rhino but in the past 10 years, 8,000 rhinos have been killed for their horns.

The horn is worth more than the price of gold per kilogram in East Asia and the poachers are often armed and dangerous. At the beginning of April, a group of armed criminals entered the Kruger National Park with the aim of harvesting a rhino horn.

Instead of the rhino, the poachers came across a herd of elephants. As you would know, elephants are social and very smart.

They also have long memories and deep family bonds. The elephants have also borne the brunt of poachers who mercilessly kill them for their tusks.

Here’s what we know so far about the death of a suspected poacher in the Kruger National Park - and the charges faced by his alleged accomplices.
News
2 years ago

The elephants were languidly imbibing marula fruit when one of them saw the advancing party of armed thugs. The elephant asked a lion to hold its drink and charged. The poachers scattered as their fellow was gored and trampled. Since elephants are herbivores, they left the body to the lions, another species that has borne human cruelty for trophy hunting or harvesting for their bones.

The lions, which ordinarily do not eat human flesh, decided it was best to dispose of the body to conceal the evidence by eating the man.

The animals knew that taking the law into their own paws was a crime in itself. Besides, many of their own relatives have had to be "put down" by human beings when they attacked a human being. The lions tore through the body of the poacher and ate every piece of him except his clothes and the skull.

When the story broke this week, the lions and the elephants were pleasantly surprised that their deed was deemed as heroic by human beings.

Instead of a backlash over the summary execution, people home and abroad hailed the killing as an example of even animals believing in the death penalty.

The public expressed relief that the lions were not harmed for eating human flesh and said the killing would send a strong message to other poachers that the animals would not take their killing lying down.