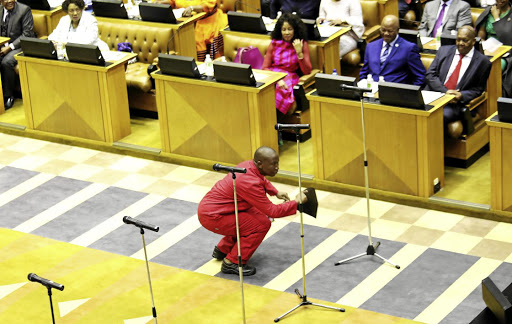 If looks could kill, EFF leader Julius Malema would be lying on parliament floor under the gaze of unamused ANC MPs Angie Motshekga and Lindiwe Sisulu on account of his flop vosho.
Image: Esa Alexander

The bonhomie between President Cyril Ramaphosa and EFF leader Julius Malema set the tone for the sixth parliament this week.

Ramaphosa buttered Malema with a dollop of margarine when he applauded the red berets for their performance in the recent general elections.

"You guys did well, jealous down," was how Ramaphosa knocked Juju's socks off when he bumped into him earlier.

Malema returned the favour by complimenting Ramaphosa for being worthy of his position. He also praised the ANC for its choice for speaker of parliament in Thandi Modise.

Notwithstanding the small but deadly matter of Modise neglecting pigs and other livestock on her farm near Potchefstroom several years ago, Malema deemed her choice as inspired.

An elated Juju lived up to his promise to enter parliament with a vosho when he was called up to take his oath. Unfortunately, his effort at the gymnastic dance could be mistaken for a jumping frog, a clear indication the commander-in-chief shouldn't venture into choreography any time soon.

The EFF's gains at the poll are not to be sniffed at in an environment where the other bigger parties, the ANC and the DA took a knock. Juju managed to increase the red overalls even as statistics showed apathy among young voters. So puffed up was Juju that he called a media conference where he made clear his party's ambition to govern Tshwane, the capital city that hangs by the thread of a coalition.

The bromance between Juju and Mmusi Maimane seems dead and buried after the DA called out the EFF on alleged VBS corruption. This comes at a time when Maimane needs all the friends he can get as his own party bays for his blood for the electoral losses. Despite the talk to the contrary, the writing is on the wall for pastor MyMoney and it's just a question of time before his scholarship to study abroad is approved.

Maimane was roped in to lead the liberal party to attract the elusive black vote but under him the DA's vote shrunk.

Compounding Maimane's woes is his familiar bugbear, twit and former mentor, Hellen Zille, whose insensitive tweets have again raised a stink and forced Maimane's hand. Unfortunately, Zille's horde of supporters agreed with her tweet on "black privilege" and frowned on Maimane for seeking to take action against her.

Now for the summit for healthy fingernails

It couldn't have happened to a nicer chap. To rub salt into his wounds, Juju and Ramaphosa are now behaving like soul buddies.

Forgotten was the little matter of Ramaphosa sticking the knife in Juju's back when he upheld the decision to expel Malema from the ANC. Even Floyd Shivambu, an uncouth deputy of the red berets, seemed smitten by Ramaphosa's flirtatious behaviour. Shivambu had previously flipped Ramaphosa a birdie in parliament.

How long the bonhomie will last is anybody's guess but at the rate Ramaphosa is taking out the trash, I am not convinced it'll be for long.

Ramaphosa sent a strong signal this week that he had his hand firmly on the wheel when dodgy characters withdrew their names from parliament. The biggest scalp was that of his deputy, David Mabuza, the man who dubbed himself a cat after surviving an alleged poisoning incident.

If only Ramaphosa can take unemployment by the scruff of the neck like he did political rivals this week, SA will be a better place to live.