Zodwa proves that a punani is mightier than a Ferrari 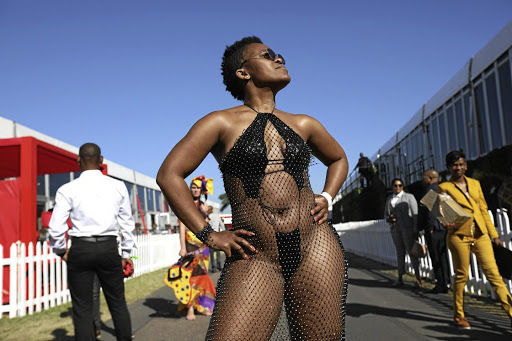 It is said that a mini-skirt should be long enough to cover the bare essentials and short enough to create interest, but someone did not get the memo.

At the horse-racing-cum-fashion show, the Vodacom Durban July last weekend, Soweto lass Zodwa Wabantu again set tongues wagging when she showed up wearing next to nothing.

While other celebrities broke their banks for sartorial finesse, Zodwa stretched the envelope and showed up at the Eyadini Village Durban July marquee with a mesh that left little to the imagination.

If her plan was to shock, Zodwa succeeded beyond expectations as cameras went into overdrive mode to capture her Garden of Eden look.

There is no doubt that her allergy to wearing a bloomer has helped build her brand and catapulted her to celebville. However, the jury is still out on what her claim to fame is.

All we know about the reality TV star is that she is a dancer and a drinker. In a world where talent is ephemeral, Zodwa has carved a niche for herself and the world has taken notice.

Her antics have brought her fame and fortune in the same way that a sex tape made Kim Kardashian a household name with no other discernible talent.

Whereas neighbouring countries have expressed moral indignation at Zodwa's antics, in SA her star continues to rise. Former Zimbabwe president Robert Mugabe once made it clear that Zodwa was not welcome across the Limpopo River unless she wore her knickerbockers.

Her invitation to a gospel festival in eSwatini has raised the eyebrows of the faithful.

These controversies have done little to harm her reputation or whatever is left of it. Until she made insensitive comments about the LGBT community on her reality TV show last week, few bothered to call her out for her nudity.

I was left with gaping mouth when Zodwa first announced her arrival with a kanga-like dress at the same event two years ago.

However, the retired strip show patron in me has since lost interest in her aesthetics. It's like seeing the same girl on the pole every evening and, as every strip club owner knows, that is a recipe for disaster for the business.

To her credit, Zodwa has invested in other businesses such as rental accommodation to look at life beyond the current glitz and glamour.

She is smart enough to realise that her mapona-pona show will not last forever. As we gawk at her unconventional methods, we should remember that she has not gone out to be a role model to anyone's child and continues to buck the trend to milk the spotlight while it lasts.

While Zodwa attained fame by dropping her panties, it took Mpumalanga businessman Sam Mshengu a convoy of 72 luxury cars to make a mark at the same Durban July event. Mshengu trended for a day on social media for his expensive junket while Zodwa dominated for longer.

This proved true the well-known Straight & Two Beers verse 69, chapter 45, that a punani is mightier than a Ferrari.