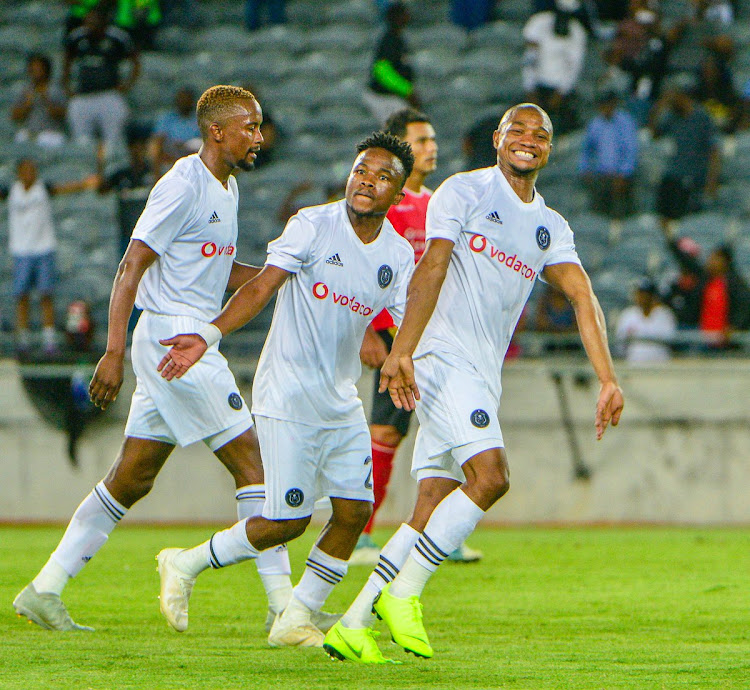 Orlando Pirates' return to the Caf Champions League after a five-year absence was ultimately convincing enough as they clinically trounced of Light Stars FC of the Seychelles 5-1 at Orlando Stadium on Wednesday night.

Mario Ravo had his team from the tiny Indian Ocean island nation in the lead in the first leg of the preliminary-round tie with a 17th-minute opening strike.

First-half replies from Thabo Qalinge in the 25th, Augustine Mulenga in the 38th, and Mpho Makola with a sumptuous free-kick in the 41st teed up what could have been a second-half goal-fest to the Soweto giants.

In the end two goals were added, though a resilient Stars made Bucs' home support wait for late, injury-time strikes by substitute Justin Shonga (93rd) and Linda Mntambo (95th) to see their team eventually run out comfortable winners.

Pirates, the 2013 Champions League losing finalists, had to come from a strike down to go into the change rooms with a two-goal cushion from the first half.

A ball given away in midfield just inside his own half by Kudakwashe Mahachi resulted in a run from Stars' Madagascan midfielder Paul Razafumanantsoa down the middle, who then threaded a pass through for striker Ravo to beat offside, then beat Jackson Mabokgwane.

Pirates only had to wait eight minutes to equalise, and did so in stylish, simple, clinical fashion.

Mulenga started a movement he would also finish playing to his deep strike partner Meshack Maphungule, who backheeled to Linda Mntambo on the edge of the area.

The Bucs midfielder got the touch through for the run of Mulenga into the box, who calmly placed a shot past Stars goalkeeper Romeo Barra.

Barra was beaten again when Makola curled a right-footed free-kick from just outside the penalty circle, just to the left, into the top-right corner.

After doing all the hard work edging a clear enough advantage in the first half, Pirates laboured somewhat to add to it against a committed, if of course outclassed, Light Stars in the second.

Soon after the break Maphungule latched onto a loose ball on the edge of the area and drove high.

Mahachi also volleyed a sitter over from in front of goal. As Bucs sought an elusive fourth goal that could make their trip to the Seychelles just a little more comfortable, they introduced heavyweights Shonga and Thembinkosi Lorch for Maphungule and Mahachi for the last 10 minutes.

Shonga duly smashed in a powerful 22-metre free-kick past Barra in injury time. And Bucs still had time for a fifth, too, as Qainge's angled pass from the left put Mntambo through, who shot in off the arm of the Stars keeper.

Mamelodi Sundowns’ attacking ace midfielder Sibusiso Vilakazi says he expects to be back in training “by next month” as he continues his recovery ...
Sport
3 years ago
Next Article