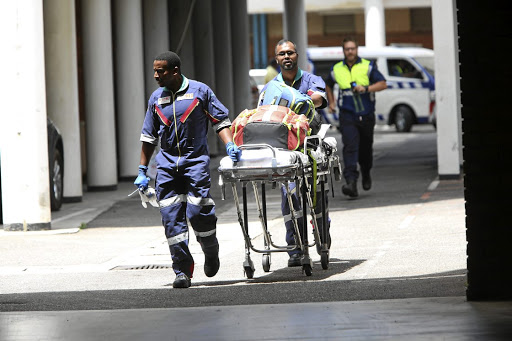 Medics leave the scene of a shooting in the Durban regional court where two people were killed in a divorce case. /JACKIE CLAUSEN

After the shooting stopped and as pools of blood snaked across the scuffed courtroom floor, Sergeant Phumlani Chiliza was found on his back still clinging to his gun.

His wife lay face down between well-worn wooden benches, blood matted in her hair.

Her brother lay against the wall in the gallery, his legs tucked beneath his body and bright-red blood encircling the hole in his white shirt.

In what would be a failed effort to take his own life, the 36-year-old policeman then turned the gun on himself.

The first policeman who burst into the room from an adjacent court found Chiliza still holding his weapon after the final salvo to end his marriage.

The KwaMashu cop, now under police guard in a Durban hospital, is accused of gunning down his wife and her brother in the public gallery of the Durban regional court yesterday.

Impeccable police sources, who spoke on condition of anonymity, said magistrate Sitembiso Maphumulo, who was hearing the day's proceedings, had just left her seat and returned to her chambers when Chiliza produced his gun.

As the prosecutor and clerk took cover, Chiliza is alleged to have opened fire on his former wife and her brother.

A policeman allegedly shot and killed two people in court before turning the gun on himself in a dramatic alleged double murder and attempted suicide, which played out in the Durban Regional court on November 26 2018.

The smoking gun was then pulled from his grasp.

It is understood that the critically injured policeman was treated by Life Response 24/7 paramedics at the scene before being rushed by ambulance to a nearby hospital.

Gunshot residue on his hands, vital evidence if he survives the shooting, was protected by evidence bags sealed over his hands.

Now his colleagues will delve into the annals of his life in an attempt to establish why he crossed over to the other side of the law.

His Facebook paints a self-portrait of a dedicated family man and father who loved soccer. His mantra, posted on his profile, reads: "It's either I fight until I die or win."

Police spokeswoman Col Thembeka Mbele said the pair had been at court for divorce proceedings.

"There had been court proceedings initiated between the woman and the policeman," Mbele said.

"The matter was stood down and immediately after the magistrate left he fired several shots toward his wife and her brother."

"He then turned the gun on himself and was critically injured."

Mbele said while investigations were at an early stage, if the man survives he would face charges of murder.