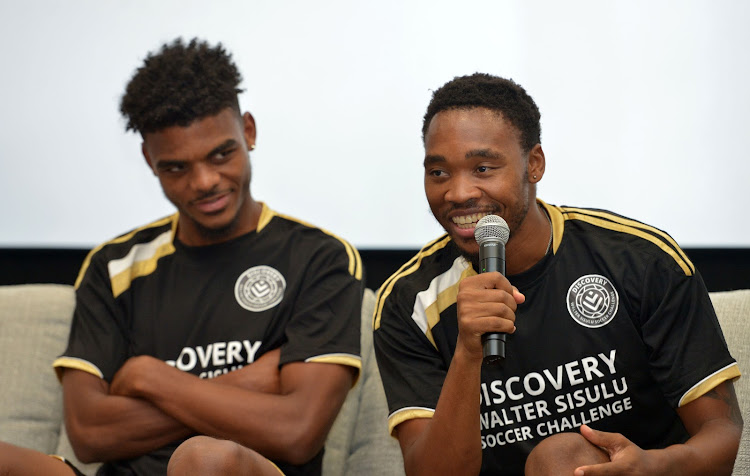 Mamelodi Sundowns’ attacking ace midfielder Sibusiso Vilakazi says he expects to be back in training “by next month” as he continues his recovery process from an Achilles injury he suffered in October while on national duty with Bafana Bafana.

The 28-year-old Vilakazi sustained the much-feared injury during a Bafana practice match against SuperSport United while in camp ahead of the national team's record 6-0 2019 Africa Cup of Nations (Afcon) qualifying win over Seychelles at FNB Stadium in October.

No specific timeframe was put on the dribbling wizard’s comeback at the time but it was expected that he would be out for the rest of the Absa Premiership season.

But the Sundowns’ star revealed that his rehabilitation has gone well and that he may be back in training sooner than expected.

“So far so good...... my recovery and rehabilitation is going well‚” said Vilakazi‚ who is still walking with the assistance of crutches‚ on the sidelines of the launch of the 16th edition of the annual Discovery Walter Sisulu Soccer Challenge in Sandton on Tuesday.

“Day by day there is progress. I take it a day at a time. The little that I do at rehab makes all the difference. So who knows maybe the earliest can be next month.

“Time will tell. It all works out in the mind so hopefully the Lord will help me get a speedy recovery. We’ll see all that in time‚” said the former Bidvest Wits captain.

Players nursing an Achilles injury need to wear a cast or walking boot for six to twelve weeks.

Vilakazi will watch from the comfort of his couch at home when his Sundowns’ teammates take on Leones Vegetarianos of Equatorial Guinea at the Estadio de Ebebiyín in the capital Malabo in the Caf Champions League's preliminary stages on Wednesday afternoon.

SA teams traditionally struggle in West Africa and it has been no different for the Brazilians.

Sundowns will have to create club history and beat a West African opponent having failed to do so in their 113 matches in Caf competitions over the years.

But Vilakazi said that statistic would only serve to motivate the team to do well.

“It’s simple. We haven’t done well against the West Africans and it’s an opportunity to put that right and do well in this match‚” added Vilakazi.

The Bafana forward’s first participation in the Discovery Walter Sisulu Soccer Challenge was in 2006 and he said the opportunity went a long way in opening doors for him to turn professional.

"At the time I was very young and not so mature when I played in this tournament for the first time and to know that this opportunity might expose me to different teams."