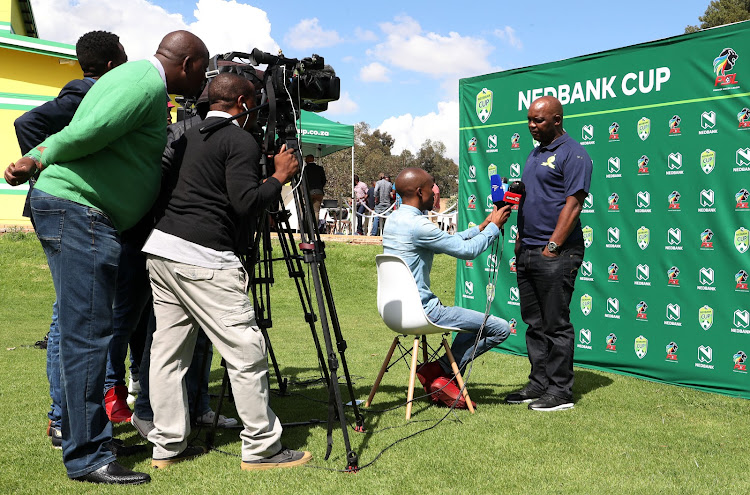 Maritzburg United are so awkward to play against that it might force Mamelodi Sundowns into a tactical change‚ Downs coach Pitso Mosimane has said of his Nedbank Cup semifinal opponents at Harry Gwala Stadium on Sunday.

Sundowns also meet Maritzburg‚ at the same venue‚ in the Absa Premiership on Wednesday with a chance to wrap up the 2017-18 title with two matches to spare should Orlando Pirates lose or draw on the same night against Bidvest Wits at Orlando Stadium.

Mosimane said he would not be too arrogant to not lower his 2016 African champions to changing their tactics against Fadlu Davids’s in-form‚ young‚ super-fit Maritzburg‚ who are enjoying their best season to be in third place in the PSL.

“Maritzburg are a very awkward team‚ hey. So awkward it’s not funny‚” Mosimane said at Downs’ Chloorkop headquarters on Thursday.

“They play in their own way. I thought the coach of Napoli [Maurizio Sarri] has got his own way of playing. I thought Pep [Guardiola]‚ I thought [Jose] Mourinho.

“And the way he plays works out. Because if it doesn’t work out why are they where they are on the log? And why are they in the semifinals of the Nedbank Cup‚ if it was wrong?

“The challenge in the way they play is for us to figure out‚ to say that as much as we concentrate on our way of playing and of attack‚ it’s also important to give them respect on the way they attack.

“They attack differently. And probably if I have to change the format – meaning the shape; I’m not talking about the players – of how we need to defend against them‚ I don’t have the ego not to do it.

“I have the humility to do it and say that if I have to adjust for the sake of the team to be in the final‚ I will have to adjust – and I will give them the respect.

“And by the way‚ they have got nothing to lose. We are expected‚ in terms of the profile of the club‚ to win.

“But profiles don’t win games and don’t book you a place in cup finals.

“Ja‚ they are a very awkward team‚ a hard-running team‚ with young players‚ and a very well-rested team.”

Maritzburg beat Baroka FC 2-0 in Polokwane on Sunday to bounce back to third place in the PSL.

They will have played three games in 18 days when they host Downs on Sunday.

Sundowns‚ by contrast‚ will have played four matches in 17 days.