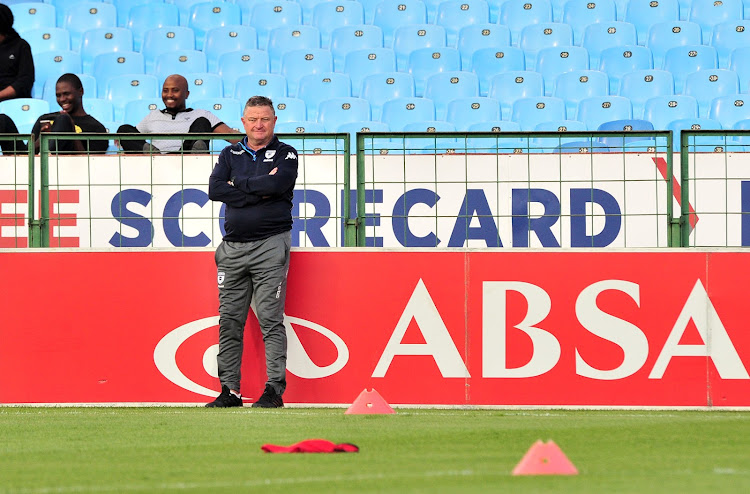 Bidvest Wits coach Gavin Hunt is starting to sound like a man who cannot wait to see the back of the current premiership season.

The struggling Wits‚ who won their maiden league title last season‚ are desperately trying to finish inside the top eight but they seem to be losing this battle after defeats to Chippa United and Mamelodi Sundowns in their last two games reversed the improvement they displayed in the second round.

Confounding matters for Hunt is the small matter of their trip to Nigeria where they meet Enyimba FC in the second leg of a second round CAF Confederation Cup play-off at U.J. Usuene Stadium in Calabar on Wednesday.

Wits didn’t look too interested when they hosted the Nigerians in the first game at Milpark at the weekend and the dull encounter fizzled into a 1-1 draw.

“It doesn’t (the trip to Nigeria) help us because we haven’t got the squad of players to go on a couple of fronts‚" said a frank Hunt.

“When we come back (from Nigeria) we’ve got a game on Sunday (at home against Polokwane City).

“We travel on Monday and have to come back on Friday from Nigeria.

"We don’t even know where we are going. It’s crazy.

“But that’s in front of us and there’s nothing we can do.

"Africa (CAF competitions) haven’t helped us a lot because we haven’t got resources. It is a problem.”

With that you can deduce what will be of importance to Hunt and his team.

Hunt’s eyes will be firmly on ensuring they at least finish inside the top eight and try to reinforce his team for next season without worrying about CAF club competitions.

For Wits to ensure they finish in the top eight they will also have to pick up points against Orlando Pirates away‚ AmaZulu FC at home and Platinum Stars away in their last three league matches.