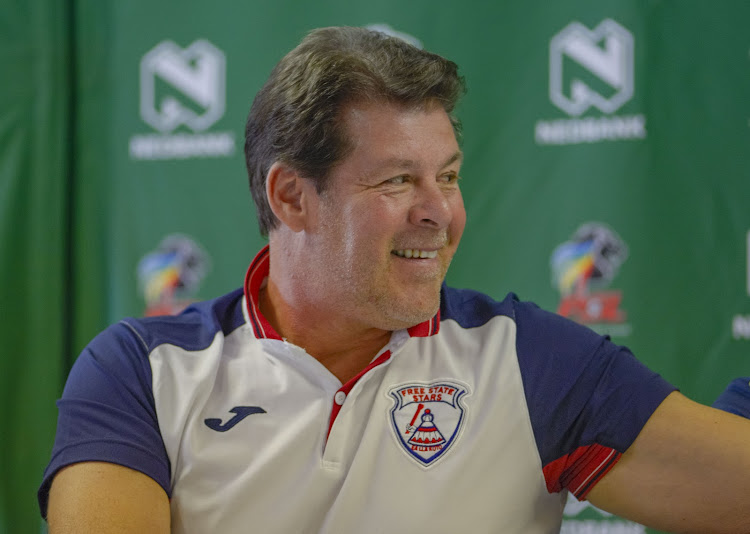 Free State Stars will be hoping to make it fifth time lucky when they tackle Kaizer Chiefs in the Nedbank Cup semifinals on Saturday having fallen four times at this hurdle over the last decade.

Stars have been to the final of the competition before‚ losing to Vaal Professionals in 1994‚ but have had heartbreak since in their attempts to repeat that feat.

In 2008 they came up against second-tier Mpumalanga Black Aces and lost 1-0‚ while two years later they went down 3-1 to eventual champions BidVest Wits.

In 2012 they were beaten 2-0 by Mamelodi Sundowns‚ while two years ago they appeared again‚ this time losing 4-2 to Orlando Pirates.

Of the four teams that have beaten them in the semis‚ only Wits went on to lift the trophy.

“It is David versus Goliath‚” Stars coach Luc Eymael told SowetanLIVE on Thursday.

“In terms of the players we have‚ the salaries we can pay‚ the players Chiefs can buy with their big budget‚ they have a big advantage with this.

"We are obviously very motivated to win‚ the club have not been to the final since 1994 and not won any major competition since that year [when they claimed the Coca-Cola Cup].

“We have players like Paulus Masehe‚ Siphelele Mthembu‚ Patrick Phungwayo and Rooi Mahamutsa who have played in cup finals before with other clubs‚ so they know how good it feels to play in a final.”

Stars have welcomed back goalkeeper Thela Ngobeni‚ who returned to training on Thursday and will be assessed ahead of Saturday’s clash at the Moses Mabhida Stadium in Durban.

Veteran Mahamutsa‚ who took a blow to the face recently‚ is also training. He won the Nedbank Cup in 2011 and 2014 with Orlando Pirates‚ scoring an own goal in the decider against Black Leopards in the first of those.

“We know Chiefs‚ we have studied them very well‚” Eymael says.

“I know by heart all the teams in the country‚ that’s my job.

“But during the match‚ the ball is always in the court of the players.

"As a coach you can put everything neatly in place‚ but the result will be determined by how the players perform. It is just like that.”