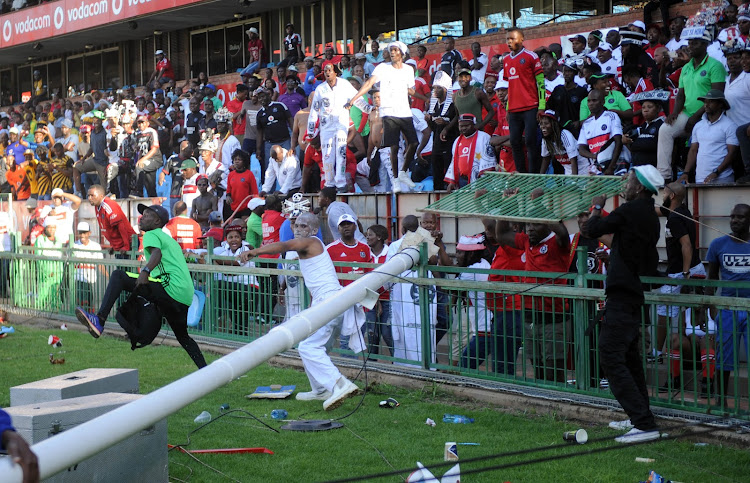 Orlando Pirates have finally been punished for the actions of their supporters more than a year after disgruntled fans rushed onto the field and ran riot during a league matche against Mamelodi Sundowns at Loftus Versfeld.

The Disciplinary Committee (DC) sanctioned Pirates to play two home matches behind closed doors but one of these matches has apparently been suspended for a period 24 months.

According to the statement by the PSL‚ it was the DC's view that the sentence was warranted because of the seriousness of the misconduct.

They were also of the view that a sanction of this nature was the only way for the fans to be punished simultaneously with the club for their errant behaviour during football matches.

Pirates was also ordered to pay the costs of the sittings of the DC.

The Bucs were finally punished after the ugly scenes that brought the game into disrepute in February last year.

The PSL match was delayed for an hour after Percy Tau’s 82nd-minute sixth goal sparked a pitch invasion first by Pirates’ fans‚ then those of Sundowns in response‚ resulting in fistfights‚ violence and injuries.

The players‚ coaching staff and benches of both sides sprinted to the safety of the changerooms.

After the PSL’s security officials were overwhelmed‚ a South African Police Service armoured vehicle drove onto the pitch and teargas and stun grenades were fired.

The match resumed after the delay and was completed with Sundowns winning 6-0 — but only after fans were treated for injuries by paramedics on the field.

World football controlling body Fifa have received the Tendai Ndoro files from the Premier Soccer League (PSL) and are expected to rule on the case ...
Sport
4 years ago
Next Article